Appliances from The Arbors find new purpose at Holding Hands 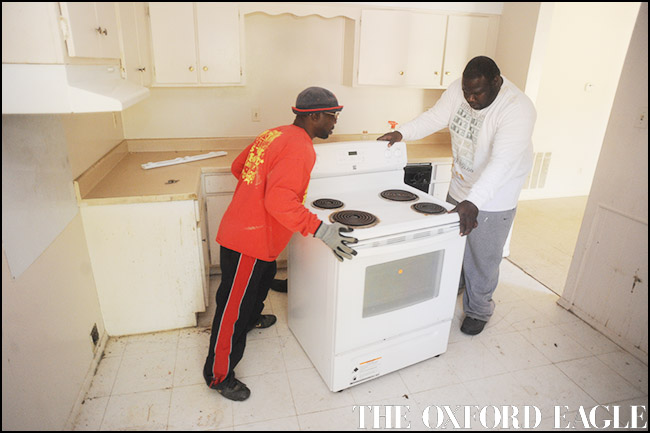 Dexter Dukes, left, and Chris Vaughn remove a stove from a unit for Holding Hands, at University Arbors in Oxford, Miss. on Monday, October 19, 2015.

The Arbors housing units are being torn down to build student housing, but not everything is going in the dumpster.

Appliances are getting a second life by heading to Holding Hands resale shop, located at 2618 West Oxford Loop.

The Holding Hands Resale Shop employs individuals with mental illness in a safe work environment, in order to help them be more independent while gaining self-respect. Each employee is provided specialized training matched to his or her unique abilities, assuring a high level of success and accomplishment.

Executive Director Donna Howard said, “September was a slow month as far as donations are concerned and I had been praying for something big to happen and it did. When I spoke with Sid I started laughing because God has such a sense of humor.”

Sid Brian, developer of the project, decided to donate to the organization. Holding Hands accepts donations of clothing, household items and furniture. It uses the income from the sales to employ those affected by mental illness.

Holding Hands should end up with more than 300 stoves, dishwashers, refrigerators and stackable washers/dryers. They have been picking them up for the past couple of weeks.

“We have posted them on our website and Craigslist,” Howard said. “There are prices for individual sale or bulk pricing is available.”

Since it has opened doors in January 2013 with three employees, including Howard, it has grown to nine workers. The organization is currently outgrowing its building and Howard hopes to make enough money to start expansion in the future. She hopes the money from the appliance sales will help Holding Hands accomplish larger goals.

Howard has worked with the mental health community ever since her daughter was diagnosed 25 years ago with chronic paranoid schizophrenia. Howard said the donation is huge for what they want to accomplish.

“If you ask parents of those employed at Holding Hands, they will tell you that it has had a very positive impact on their child,” she said. “People suffering from mental illness are so often misunderstood. Most of the time they appear fine but that is not always the case. They have misperceptions quite often of how things really are. They often need reassurance. You have to have a great deal of patience and understanding to work with those with mental illness.

“A good many people with mental illness are unemployable. Holding Hands offers them an opportunity to work and feel good about themselves.”