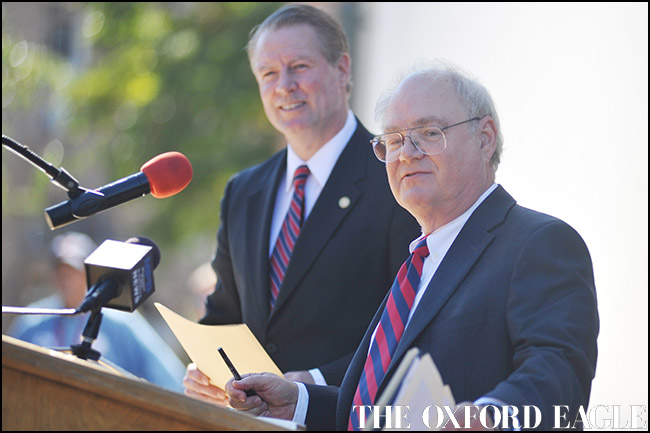 Alan Perry, right, president of the Board of Trustees of State Institutions of Higher Learning, and Dr. Glenn F. Boyce, Commissioner of Higher Education, speak after Jeffrey Vitter was announced as the preferred candidate for the chancellorship of the University of Mississippi, outside the Lyceum at the University of Mississippi, in Oxford, Miss. on Monday, October 19, 2015. (AP Photo/Oxford Eagle, Bruce Newman)

On the same steps where hundreds rallied in defense of former University of Mississippi chancellor Dan Jones last year when the Board of Trustees of State Institutions of Higher Learning did not renew his contract, IHL president Alan Perry announced Monday the trustees have selected Jeffrey S. Vitter as their preferred candidate for the chancellorship at Ole Miss.

The university faculty and students will get a chance to meet him next week and give their input before the Board of Trustees makes it a done deal.

Vitter is scheduled to come to campus Oct. 29 to meet with faculty, students, staff and alumni. Barring heavy disapproval by campus groups, trustees are likely to vote later that day to appoint him as the leader of the 24,000-student university.

Vitter serves as provost and executive vice chancellor and the Roy A. Roberts Distinguished Professor at the University of Kansas. His academic home is the Department of Electrical Engineering and Computer Science and he is a member of the Information and Telecommunication Technology Center. KU includes the main campus in Lawrence, with 10 colleges and schools, the Edwards Campus in Overland Park and the Medical Center campuses in Kansas City, Wichita and Salina, Kansas. As provost, Vitter is the chief academic and operations officer for the Lawrence and Edwards campuses.

Vitter initiated and co-led the campus-wide development of KU’s strategic plan, “Bold Aspirations: The Strategic Plan for the University of Kansas, 2012-2017.” The plan is the university’s transformative road map toward its vision of excellence as a top-tier public international research university.

While at KU, he created the first-ever university-wide KU core curriculum; oversaw major facilities improvements and expansion; and led the expansion of the schools of Engineering, Business and Pharmacy.

His educational degrees include a B.S. with highest honors in mathematics in 1977 from the University of Notre Dame; a Ph.D. in computer science under Prof. Donald Knuth in 1980 from Stanford University; and an M.B.A. in 2002 from the Fuqua School of Business at Duke University.

His hometown is New Orleans, Louisiana, and he and his wife Sharon have three children.

Campus listening sessions were conducted on the campuses in Oxford and Jackson in July and August with constituency groups for the members of the Board Search Committee and the Campus Search Advisory Committee to hear what qualities and qualifications stakeholders believed the next institutional executive officer should possess.

“The Campus Search Advisory Committee and I appreciate the feedback that we received from the campus community during the listening sessions,” said Clark, who chaired the Campus Search Advisory Committee. “Dr. Vitter is an exceptional academician, educator, researcher and leader. He understands what it means to be at a top-tier public research university and has a vision for leading the University of Mississippi to even greater success.”

“I would like to thank the members of the Campus Search Advisory Committee, under the leadership of Dr. Alice Clark, for devoting their time and expertise to this process,” Perry said. “Each one understood the weight of the decision and took the responsibility as the voice of the campus community very seriously. Their input was vital throughout the search.”

Perry said Vitter was “head and shoulders above the rest” of the other candidates interviewed for the position. IHL received 50 applications.

“We had an amazing pool of candidates,” said IHL Commissioner Glen Boyce before Vitter’s name was announced Monday. “We had amazing participation from the public and received great feedback from the community which assisted the search advisory committee.”

During interviews after the announcement a reporter asked Perry if it was a concern of the trustees that Vitter was not from Mississippi.

“He is a Southerner, through and through, I can tell you that,” Perry said.

Other questions by area media seemed to focus on whether Vitter has experience dealing with diversity issues.

“I don’t want to put words in Dr. Vitter’s mouth,” Boyce told reporters. “But that is an excellent question that I hope you ask him next week.

Oxford Mayor Pat Patterson and Oxford and Lafayette County Chamber of Commerce and Economic Development Foundation President and CEO Jon Maynard both said they are looking forward to working with Vitter if he is officially hired as chancellor.

“On behalf of the Oxford community, we’re excited to welcome Dr. Vitter to Oxford,” he said Monday. “His credentials are outstanding and we look forward to continuing the fantastic town and gown relationship that has stood between the university and this city for 167 years.”

“I would like to welcome Dr. Vitter into the Oxford family,” Maynard said. “We look forward to Dr. Vitter’s leadership of the university in our continued regional growth.”

Faculty Senate Chair Michael Barnett and Associated Student Body President Rod Bridges, who both sat through interviews, both said they thought trustees had done a good job of listening to campus concerns.

However, Allen Coon, senator on the Associated Student Body and president of the Ole Miss College Democrats, said Bridges doesn’t speak for the entire student body and that he has some reservations, saying he was disappointed no one who opposed the decision to not renew Jones’ contract was asked to be part of the selection committee.

Coon was one of the leaders of the “I Stand with Dan,” organization that protested Jones’ contract not being renewed.

“Dr. Jones was a paragon of progress and change with positive growth,” Coon said. “It was difficult to see him attacked and thrust out of his position by a political IHL. So there’s a sense of hesitancy. IHL failed us as students, and failed to respect the views and needs of Ole Miss. I’m very leery.”

Coon said he will meet with Vitter next week to get a feel for his views on inclusion and social justice as well as diversity and moving the university forward to continue the progress made by Jones.

“I want to understand his goals, why he came here and help him to understand the importance of addressing the issues of race that plague our campus,” Coon said.