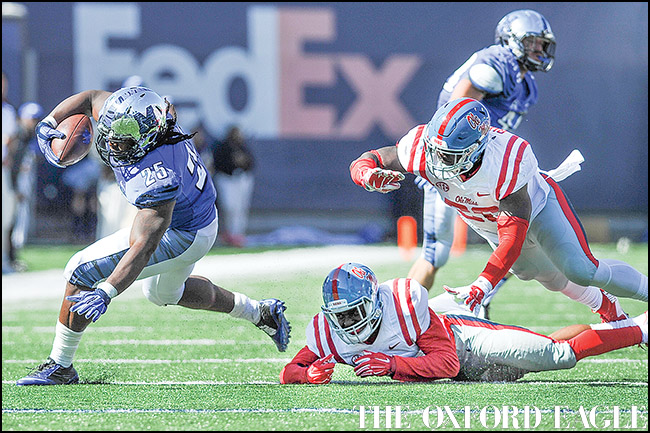 Each Sunday reveals the truth for Ole Miss’ football team.

The day after each game, coaches and players meet for brutally honest assessments of what happened the day before. Tape is dissected with the occasional pause for players to see what they did right or wrong — mostly wrong — over the course of four quarters.

The film doesn’t lie, and the truth of what each defensive clip showed 24 hours after Memphis’ stunning win over the Rebels hurt.

On display were more busted coverages for a defense that’s now ranked 12th in the Southeastern Conference against the pass and struggles mightily to get off the field. But it also highlighted a mounting problem the Rebels are having in getting ball carriers to the ground.

Head coach Hugh Freeze said the coaching staff charted 30 missed tackles against the Tigers, who rolled up 384 of their 491 yards of offense through the air, by far the most the Rebels have allowed this season. While Memphis’ receivers and tight ends ran free most of the day, there were times, Freeze said, when the Rebels were in position to prevent short gainers from becoming longer, to no avail.

“I don’t know how else to describe it,” Freeze said. “When you miss tackles, your fundamentals are bad. That was the case Saturday. We need to go back to our tackling circuit and improve on it.”

Freeze said he counted numerous instances on film where a defender was in the right spot Saturday only to come up empty. The Rebels had plenty of chances to get off the field, putting Memphis in third-and-long situations, but Tiger ball carriers wiggled free from Ole Miss’ linebackers and defensive backs far too often to keep drives alive.

Memphis finished 12 of 20 on third down with eight of those conversions covering at least 7 yards. The Rebels are giving up 9.4 yards per reception and allowing teams to convert on third down 43 percent of the time, which ranks 100th nationally.

“Over five different occasions we had the perfect call, and the play didn’t get made,” Freeze said. “We need to continue to see if we are not communicating it effectively or what is causing the problem. We have to continue to work.”

Ole Miss didn’t do full-scale tackling during fall camp in order to try to get to the season as healthy as possible, and Freeze has scaled it back during practice with injuries piling up amidst a Southeastern Conference grind that has the Rebels playing 10 straight games before a bye Nov. 14.

“We just need to practice some more,” Caldwell said. “We need to do more tackling drills in practice.”

It sounds like the increase in physicality is coming.

“Looks like we need to go back to extending practice a little bit and having the (individual) time to tackle because between the five right calls that you don’t have and the missed tackles, it made for a long afternoon,” Freeze said.

Said Caldwell, “The film didn’t lie. We all saw it in the film room, so we all just came to a mutual agreement that that’s one thing that we need to get better at.”