Chargers roll to second round of playoffs 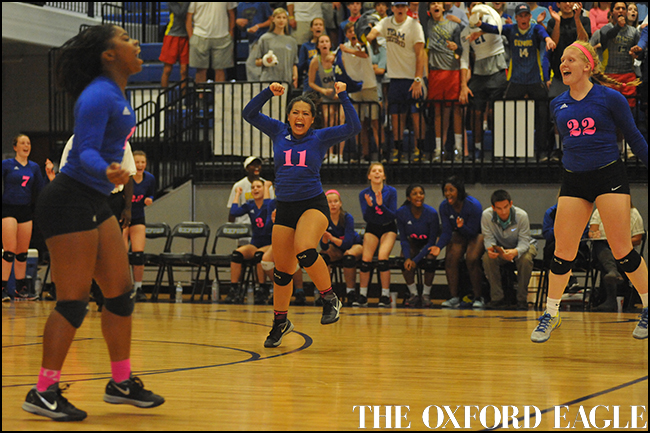 Oxford High's Summer Batoon (11) celebrates as the Chargers win the first set in their match against Center Hill in MHSAA Class 5A playoff action in Oxford, Miss. on Tuesday, October 20, 2015.

Inside a raucous Oxford High gym, the Chargers welcomed Center Hill in a first-round matchup of the MHSAA Class II playoffs Tuesday night.

The win sent the Chargers into the second round, where they will face Corinth, which swept Caledonia 3-0 in its first-round match.

The gym was packed with fans and students in what could easily be called the largest crowd to attend a Chargers’ volleyball match in quite some time. Fellow teams were also in attendance to show their support as football coach Johnny Hill ended practice early so players from the football team could take in the match.

The energy appeared to fuel Oxford (28-8) as the Chargers jumped out to a quick 15-8 lead in the opening set and coasted to a 1-0 advantage over Center Hill.

“Everybody comes out for a playoff game,” Oxford coach Tara Ross said. “It was loud, and for a while, I thought it was going to be a deterrent because we’re not prepared to play in that. … We were very pumped up anyway, and when they saw the fans were here, they definitely fed off of that.”

The first set may have been a breeze for the Chargers, but the second was anything but easy.

Center Hill made it a competitive frame, grabbing a 5-2 lead over Oxford and keeping itself out front by at least a point for the majority of the set. After trading points back and forth and keeping a two-point cushion throughout, the Chargers set out on an 8-1 run with the score 19-17 in favor of the Mustangs to claim a 2-0 lead.

“We’ve had so many games where we haven’t had to play that competitively, and so I’m proud of us for sticking to it and taking care of business,” Ross said. “Volleyball is an emotional game, and if we can get in the other team’s head some way, it helps.”

Old help
Oxford sealed the victory in the third set, jumping out early and keeping the Mustangs at bay long enough to pull away for a comfortable margin.

It was the first time the schools had played each other all season after having been in the same region for the past several seasons. Ross still managed to find a way to prepare for Center Hill by finding some match film, which helped get her team prepared to play.

The Chargers’ second-round opponent will be a little more familiar as they faced Corinth at Corinth on Aug. 18 and won 3-2.

Oxford will play Corinth either Thursday or Saturday. The date and time had not been confirmed as of this morning.

TACKLING THE ISSUE: Defense may change practice habits to…