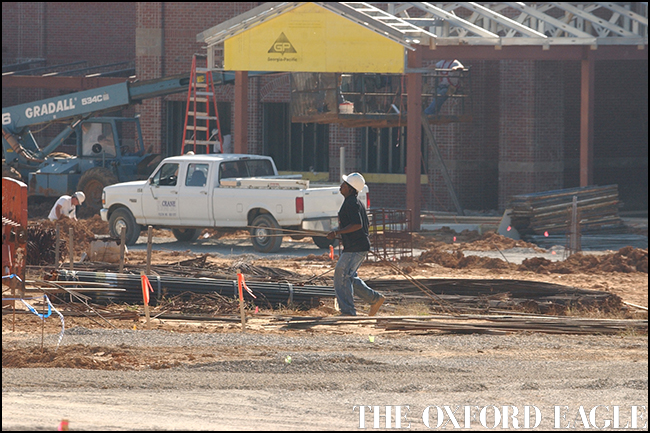 The conference center was about halfway complete.

Yesterday’s papers take us to a playground in Western Hills, a look at the conference center, a semi-scandal at the University of Mississippi, a kudos for the economy in Lafayette County and a glimpse at how low gas prices were in 1981.

Kids and families in the Western Hills neighborhood may soon have a new and close option for outdoor recreation.

The Amos Network is partnering with the area’s neighborhood watch group to work on a small park in the subdivision, which is west of Oxford in the area of Old Sardis Road and Ancorage Road.

Property owner Bobby Briscoe of Tupelo donated a lot for the park, which has been desired since at least 2005.

The Oxford Conference Center at the end of Sisk Avenue is officially more than half complete and its opening date has been rescheduled for March 2004.

Work at the site began about two years ago but rain delays interfered with the construction, which was mostly underground and outdoors.

Delta Kappa Epsilon’s fraternity at the University of Mississippi was temporarily suspended for posting online photographs of strippers at an off-campus party.

Officials said while an investigation is ongoing, fraternity members can still live in the house but are not allowed to have organized meetings or social events. The dean of students will lead the investigation.

Lafayette County again ranks first in the state for the highest number of people employed.

In one month, the county jumped from sixth to first place and recorded the lowest jobless rate during September.

The last time the county ranked first was in February, which also marked the sixth consecutive month Lafayette County held the statewide lead.

Smith Oil Inc. took the winning bid this week to supply fuel for the city of Oxford with a price of $1.0845 a gallon for regular gas and $1.0720 for diesel fuel.

One other bid was submitted by Phillips Oil Co.