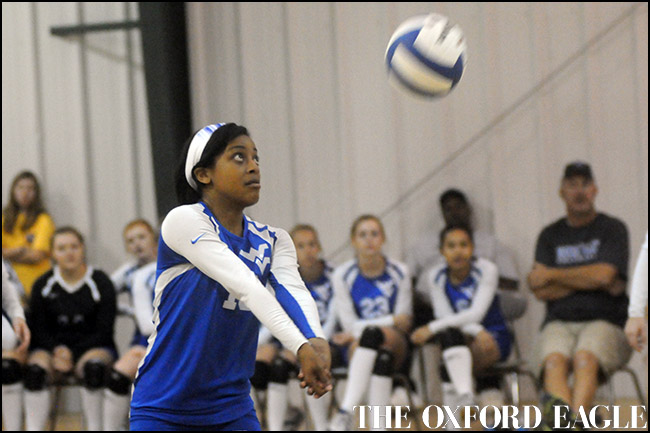 WATER VALLEY — It was a quick night’s work for Water Valley.

The Blue Devils swept the Pisgah Dragons 3-0 (25-18, 25-20, 25-4) in their first-round match of the MHSAA Class I playoffs inside the multipurpose building on the Water Valley High School campus Thursday night.

While the match was won in straight sets, Water Valley had to earn every point it scored in the first two sets.

Pisgah made it competitive and for a while, it was a match that was being controlled by whichever team was serving. The Blue Devils would pull ahead only to have Pisgah rally back once it was back on serve.

It was hard for either team to gather and even maintain momentum early on.

“We didn’t do as well with the serve-receive as I thought we should have,” Water Valley coach Casey Clouse said. “They came along after they got warmed up, and I felt they did really well.”

Water Valley earned the No. 1 seed out of its region after going undefeated in the regular season in region play. With that No. 1 seed usually comes a first-round match against a lesser opponent, but Pisgah was not about to lay down and let the Blue Devils walk right past it into the second round without a fight.

In the opening frame, Pisgah stayed close, tying the set at 15-15 until the Blue Devils went on a 10-3 run to earn an early 1-0 advantage.

The Dragons continued to stay close with Water Valley in the second set, trailing 15-13 at one point before another 10-7 Blue Devil run closed out the set.

Water Valley then poured it on in the third set, cruising to a 15-2 lead and keeping the pedal down to win the match and keep its season going.

The homecourt advantage is something the Blue Devils have used to the fullest, losing only one match at home the entire season, though Clouse feels they play even better on the road.

They will look to continue their homecourt dominance on Saturday at 4 p.m. when the Blue Devils host Madison-St. Joseph’s in the second round with a berth to the North Half championship at stake.

The leadership on the Water Valley team is some that Clouse is proud of and has been one the major keys to the success this season, which has been one of the better years for the Blue Devils under Clouse.

“Over and beyond,” Clouse said of her leaders meeting her expectations. “KeKe (Farrow) is a big leader and Octavia (Williams). It seems like a lot of them take their own leadership roles throughout the game, whatever it may be. I’m really proud of them right now and the way they’re playing. They don’t care who’s on the other side. They’re just going to play until whoever comes out on top.”