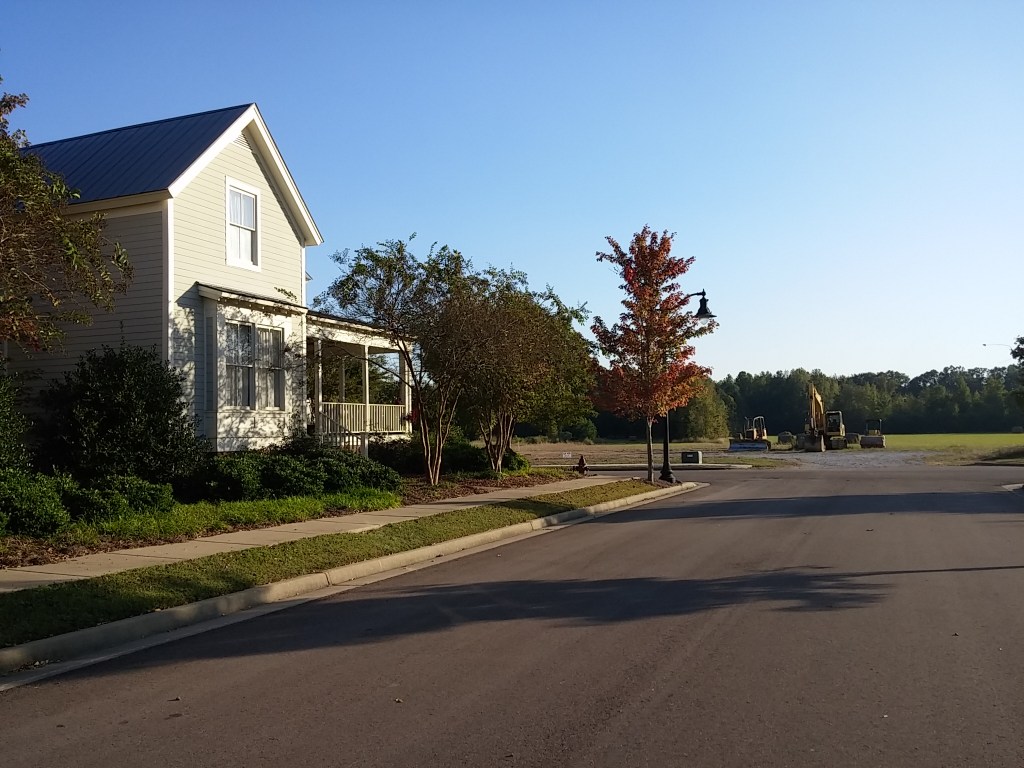 Plein Air is poised for more growth in Taylor.

Sitting in the center of town on Taylor Grocery’s front porch on an October afternoon is serene, with the sounds of woodpeckers knocking, the feel of a cool breeze and the sight of dozens of folks waving when driving past the First Street stop sign.

Drive over to Plein Air and all is still except for the sounds of the birds, two ladies chatting on a porch and men standingy by a bulldozer in the next block planning more growth amid hay bales.

Taylor boasts a post office, a newer, top-notched firehouse, a town hall, a couple of businesses, an empty cotton gin that could be reopened if needed and a lot of houses artists are now calling home.

Not much is going on in the village of 339, and its leaders and residents are just fine with that. Part of Taylor’s charm is its peaceful living, just a few miles north of the hustling and busting Oxford.

“It’s a peaceful little place to me,” said Taylor Grocery owner Lynn Hewlett. “Probably wouldn’t be for everybody — there’s really not a whole lot going on here.”

What Taylor does have going on is it can boast having a highly creative population.

Hewlett said Bill Beckwith led the way, first arriving to town and showing residents artists can sometimes look a little different, but the heart is good. He told a friend about Taylor, who told another friend, and gradually Taylor became an artist living quarters destination.

“It has a high number of artists per capita,” said Plein Air real estate developer Campbell McCool. “That’s just one interesting phenomenon. To a lot of people that’s what Taylor represents. It has won a governor’s of Mississippi award for the arts. They normally award institutions, but it was recognized as a town.”

McCool said in the 1980s it really started to thrive as an artist town. In the center of town surrounding Taylor Grocery are a potter, sculptor and a photographer to start.

“Some make a living of it, some don’t, but it’s all a part of the community and there’s not any that I don’t like,” Hewlett said. “They’re all nice folks.”

Hewlett continues the tradition of being inclusive for artists by bringing in the non-sculpting sort — he opens up Taylor Grocery as a music venue for young artists just starting out.

“These young people have to have a place to start,” he said. “We try to give them a place to get their feet wet, so to speak. I’ve seen a lot of them turn into really good ones.”

People are flocking to the country living scene in Taylor, even though it’s slowly.

Taylor Green is right outside town on the way from Oxford — a quiet, growing subdivision with children riding bikes in the street with moderately sized homes and small lots.

Inside town is Plein Air, which is currently adding on a chapel to further its destination as a scenic wedding venue.

“Campbell’s place is growing at a good rate for the community, it’s a good thing,” Hewlett said.

“There’s always a little growth going on around here. I like growth, just at a slower pace. I’m in business — you’ve got to be thinking ahead. The kind of growth we have, I like. The people in Plein Air are all nice folks. I’ve not met a one of them that didn’t come here just to be here and enjoy it.”

McCool said the growth that is trickling into Taylor is sticking around due to the population surge in Oxford.

“The price point of housing in Oxford has forced people to look outside Oxford a bit,” he said. “You have Taylor, which is getting closer to Oxford by the month. It’s now four miles away and a straight shot down the road from the hospital. It shines a further light in this direction. Taylor is extremely well-positioned to continue growing.”

If you go back 100 years ago, Taylor was a busting town where the railroad went through and people were drawn to town. Then in the 1960s when that boom quieted, Taylor turned into a quiet, farming community.

Hewlett said the town had four stores in the 1960s and was thriving, but things changed when the school was shut down in 1965.

“It’s clamored back, it’s holding on and things are picking up,” Hewlett said.

Now, its not the railroad drawing people in — it’s the quiet, country charm.

“It’s really been in the past 15 years Taylor has started really growing and blossoming again,” McCool said. “Now you have development of Plein Air and we’re creating a neighborhood of traditional homes, sidewalks, front porches and all that at a price point much more reasonable than a lot of places in Oxford proper. All those thing have kind of worked in Taylor’s favor.”

Planning commission member Edye Conkerton said at a village level they are planning for the growth and are pleased with the direction it is taking.

“We’re catching up on our regulations with the county so that all our codes and things are the same, but other than that there’s a little bit of building going on,” she said. “There’s several people that are moving back that I know of on family land and building essentially their forever houses.”

Conkerton said unlike some other places in Lafayette County, when people build out in Taylor they do it on large pieces of acreage, so there are not any subdivisions built up with homes stacked nearly on top of one another.

“I found this spot in Taylor on a gorgeous fall day, deer in the backyard, trees beautiful, things like that,” she said about when she found her home there. “It’s just been a quiet, nice place to live with plenty of neighbors that are wonderful. It’s a real strong community atmosphere here.”

“Taylor is a lovely place to live, for the very reason that there’s not a whole lot going on there right now,” he said.