BACK ON TRACK: Ole Miss’ defense leads Rebels to upset of Aggies 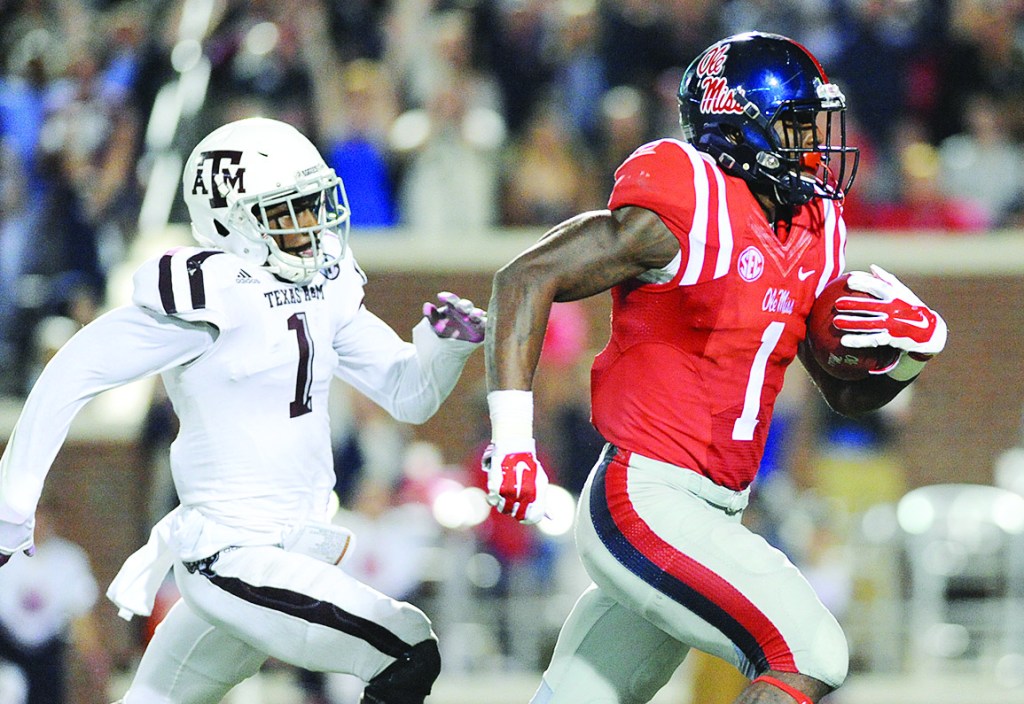 Ole Miss coach Hugh Freeze said he’d find out how much heart his team had against Texas A&M.

The Rebels had plenty — and found some defense, too.

No. 24 Ole Miss got ahead early and clamped down on one of the Southeastern Conference’s most prolific offenses to rebound from a woeful performance against Memphis and keep itself in control of its own destiny in the SEC West race for at least another week with a 23-3 win over the 15th-ranked Aggies in front of 60,674 Saturday at Vaught-Hemingway Stadium.

Ole Miss’ offense looked like its usual self, producing the big plays it’s been accustomed to this season and getting some rare traction on the ground against the SEC’s worst rush defense. Star offensive lineman Laremy Tunsil made his season debut following his seven-game suspension for rules violations to protect the blind side of quarterback Chad Kelly and help open holes for a running game that churned out 230 yards, its highest total against a conference opponent since running for 233 in the 2012 Egg Bowl.

“With (Tunsil) coming back, it gave everybody pretty much their comfort zone back,” Ole Miss running back Jaylen Walton said. “Everybody got back to playing their regular position, and he definitely helped us in the pass and the run game.”

But the biggest surprise was a defense that looked more like last year’s suffocating unit than the one that’s been giving up yards and points in bunches this season.

Even without star defensive tackle Robert Nkemdiche and safety Tony Conner, Ole Miss (6-2, 3-1 SEC) put pressure on A&M quarterback Kyle Allen, stuck to receivers and got off the field to give the offense extra possessions. The Aggies (5-2, 2-2) came in with the SEC’s second-best passing offense, but Allen completed just 12 passes for 88 yards as the Rebels built a 20-point lead in the third quarter on their way to their first win over a team with a winning record since beating Alabama on Sept. 19.

Winning out means Ole Miss would represent the Western Division in the SEC Championship Game, but games against Auburn, Arkansas, LSU and Mississippi State remain.

“It can only build confidence,” Kelly said. “We’ve got to correct the mistakes we made in this game and get better.”

An Ole Miss defense that gave up more than 30 points a game in its first three league contests and was carved up to the tune of 37 points and 491 total yards last week in Memphis held A&M to a season-low 192 yards and forced three turnovers.

The Rebels’ first seven opponents converted 43 percent of the time on third down, but the Aggies didn’t have nearly as much success sustaining drives, getting the necessary yardage just 6 of 20 times.

“Could you say we lost our confidence from the outside looking in? Yeah, probably,” linebacker C.J. Johnson said. “But I don’t think none of those guys in there (in the locker room) lost their confidence. We just had to have a few plays go our way for us to really play with that enthusiasm we’ve been missing.”

Kelly went 26 of 41 for 241 yards with a 7-yard touchdown pass to Evan Engram to open the scoring late in the opening quarter. He added a 58-yarder to Laquon Treadwell to give Ole Miss a 23-3 lead with 9:16 left in the third.

Treadwell finished with five catches for 102 yards. Jaylen Walton led all rushers with 97 yards on 22 carries while Akeem Judd had a career-high 68 yards.

The Aggies didn’t get on the board until Taylor Bertolet’s 44-yard field goal with 2:27 left in the second quarter. Ole Miss padded its first-half lead with three field goals from Gary Wunderlich with his 22-yarder giving the Rebels a 16-3 lead at the half.