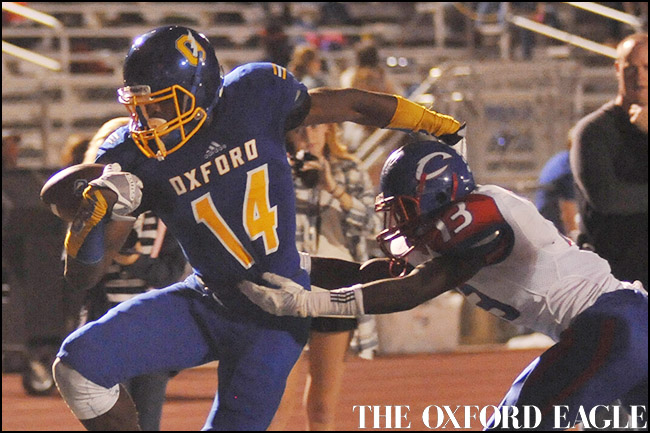 Oxford will have a chance to get back to the MHSAA Class 5A state championship game.

That much was assured Friday night at Bobby Holcomb Field when the Chargers coasted past Clarksdale, 53-13, to clinch their spot in the postseason. With one goal out of the way, Oxford’s focus now turns to the other — winning the region and earning a No. 1 seed with games left against Center Hill this week and Lake Cormorant to conclude the regular season.

“It’s huge to go ahead and get that playoff berth out of the way, finish strong and focus on these last two teams,” Oxford quarterback Jack Abraham said.

Abraham threw three touchdown passes, Hiram Wadlington ran for a pair, and Oxford (7-2, 5-0 Region 1-5A) scored 43 unanswered points from the middle of the first quarter on to take control. The Chargers racked up 492 yards and have scored at least 46 points in each region game as part of a six-game winning streak since back-to-back losses to Starkville and Madison Central.

“After those two losses in a row, we kind of cracked down and told ourselves that that’s not who we are,” Abraham said of the offense’s recent production. “We’re a lot better than that. Practice has been great, and we’re executing at a high level on the field. Run game, pass game, everything’s been 100 percent perfect. Hopefully we can keep on carrying it on to the playoffs.”

Oxford scored on all six of its first-half possessions, including two that lasted just one play thanks to a pair of blocked punts that set the Chargers up inside Clarksdale’s 10-yard line each time.

Wadlington, who finished with 64 yards on 13 carries, scored on runs of 8 and 23 yards while receiver D.K. Metcalf ran in from 7 yards to give Oxford a 32-7 lead at the break.

Abraham went 12 of 18 for 258 yards and threw his final touchdown pass to tight end Zach Cousar for a 4-yard score midway through the third quarter to push the Chargers’ lead to 46-7, allowing Oxford to empty its bench. Josh Patton ripped off a 61-yard touchdown run late in the third quarter.

“What I’m real proud of is our guys have bowed up every week and met the challenge,” Oxford coach Johnny Hill said. “They’re prepared, they come ready to play, and that’s hard to get high school kids to play at that intensity when you feel like you’re better than your opponent. A lot of times, it’s real easy to play down to your opponent, and our kids haven’t done that. I’m very, very proud of them for doing what they’re doing.”

Abraham also threw touchdown passes of 26 and 59 yards to Jimmy Greaser, whose 85 yards led all receivers.

Davion Hill’s 15-yard touchdown run on Clarksdale’s first possession gave the Wildcats (6-4, 3-2) a 7-3 lead with the bruising running back piling up 56 yards on the drive, but Oxford limited Hill to just 57 yards the rest of the way. The Wildcats mustered just 97 yards after halftime.

“He ran through a lot of tackles,” Hill said. “We’ve got to do a better job on tackling, but all in all, I thought it was really, really good.”