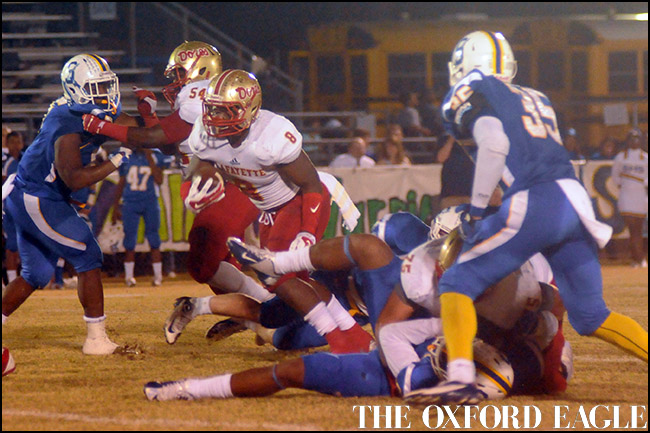 Win and the Commodores were not only in the playoffs but would wrap up the Region 2-4A title.

Once the final whistle blew, their fate was officially out of their control as the Warriors defeated Lafayette, 20-19, in what included an exciting fourth-quarter flurry.

The Commodores (8-2, 3-1 Region 2-4A) had their chances to put the game away, but turnovers and a costly final defensive stand handed Senatobia (8-1, 4-0) the win and seemingly the region title if it can take care of business next week against Rosa Fort.

After senior Tyrell Price put his teammates on his back, running for a 24-yard touchdown to put Lafayette up 19-14 late in the fourth quarter, the Commodore defense just needed to make one final stand with 2:24 left.

A breakdown in the secondary, an area of concern for Lafayette heading into the matchup, allowed Senatobia to score on a 69-yard touchdown pass when quarterback Cooper Stevens hit receiver Travis Tucker on a post route. The Warriors retook the lead with just over two minutes left.

It was plenty of time for Lafayette to march down the field and attempt a game-winning field goal, but the Commodores didn’t get the chance as Quin Jones fumbled the kickoff return, allowing the Warriors to recover and seal the victory.

“(Senatobia) played harder than we did,” Lafayette coach Eric Robertson said. “We tried to respond and play hard, but they just made a play at the end. We come down with a great opportunity to win the ballgame, and they respond and make a play.”

The marquee matchup of interest heading into the game was Senatobia’s stout rush defense against Price. Early on, the Warrior defense was winning that battle with Price having only one run of more than 15 yards in the first half (32).

The Lafayette senior was the offense producer Friday night, scoring all three touchdowns with two coming in the first half. He finished the night with 206 yards on 32 carries.

No passing through
It had to be Price’s show as the passing game was non-existent for the Commodores with quarterback Will Ard going 3 of 7 for 11 yards.

“It definitely hurt us,” Robertson said of the passing game. “We struggled to throw the football. That’s one thing we thought we could do against them, and we couldn’t. I thought we got our running game going at the end and we ran the ball well. Sometimes you have a night like this where you don’t play your best.”

Senatobia got on the board first when Maurice Toney found the end zone on a 37-yard touchdown run midway through the second quarter. A failed two-point try made it a 6-0 game.

Lafayette answered on back-to-back drives with touchdown runs by Price of 2 and 8 yards, respectively. A made and missed point-after by Robbie Langley gave the Commodores a 13-6 halftime lead.

Toney scored his second touchdown of the night when he ran in from 1 yard out.

Penalties were an issue for Lafayette all night as personal foul calls as well as offside, false starts and delay of games sent the Commodores backward at key times when they were marching forward toward the Warriors’ end zone.

Turnovers hurt Lafayette as well. Besides Jones’ fumbled kickoff, Price had a fumble of his own during the Commodores’ first possession of the second half.

“We just did a lot of things to hurt ourselves,” Robertson said. “Uncharacteristic stuff. Maybe we weren’t focused, and I’ll take the blame for that.”

Lafayette caused some turnovers of its own with Zeke Elliot having an interception and recovering a fumble.

Lafayette can wrap up the No. 2 playoff seed in the region with a win against Byhalia this Friday.

No. 13 Rebels shut out Tennessee