BACK IN THE GROOVE: Rebels regain confidence for stretch run in SEC after win 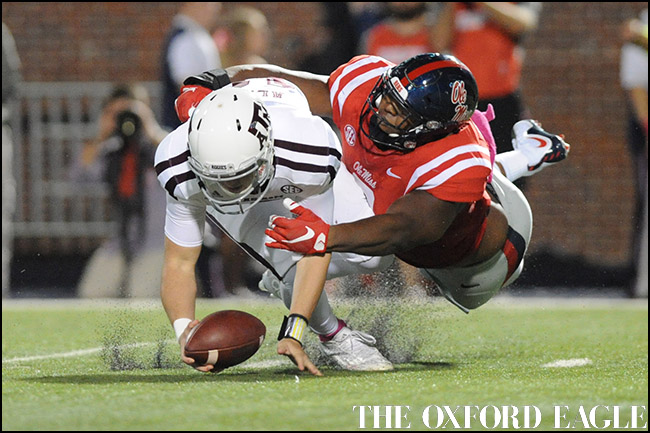 The Rebels had just come off a 37-24 beatdown at the hands of undefeated Memphis and were searching for answers.

Fast forward seven days and the 19th-ranked Rebels are experiencing a completely different set of emotions after their 23-3 win over Texas A&M Saturday.

“I’m extremely proud of our kids and coaches,” Ole Miss coach Hugh Freeze said after the game. “During adversity in life, you learn a lot about people, everyone. You find who is really who.”

The biggest of those question marks was circled around the run game. After an abysmal performance against the Tigers, the Rebels found what they had been looking for all season– a balanced attack on offense.

Ole Miss (6-2, 3-1 Southeastern Conference) rushed for 230 yards against the Aggie defense on Saturday.

There can be some correlation drawn to the success on the ground with the return of left tackle Laremy Tunsil. The junior lineman made his season debut after serving a seven-game suspension and gave a boost to all phases of the offense.

“We just wanted to fight as hard as we can for 60 minutes, and we did that,” quarterback Chad Kelly said. “We’ve got to correct the mistakes we made in this game and get better. We got the win, and that’s all that matters.”

The offensive effort paired with one of if not the best defensive performance of the season for Ole Miss has the Rebels feeling good about themselves heading into the final four games of the season.

They are not just any four games, but they are all against SEC West foes, including No. 4 LSU on Nov. 21 which could be for the all the marbles and a trip to Atlanta.

To get there, the Rebels first have to get past Auburn on the road on Halloween (11 a.m., ESPN) then a home game against Arkansas on Nov. 7 before finally hitting their bye week.

The good news about the Rebels’ final stretch of games, including the Texas A&M game, is that three of their last five games are played inside the friendly confines of Vaught-Hemingway Stadium.

“We’ve got Auburn at a difficult environment on the road, and we haven’t handled the road real well,” Freeze said. “I’d rather play at home. Maybe (Auburn coach) Gus (Malzahn) will be a good friend and let us play at home. I doubt it. We’ve got to prove we can go on the road and handle them.”

With the win over the Aggies, there is new life for Ole Miss, which still controls its destiny in the SEC West race. That control is walking a razor-thin line, though, as the Rebels have to go a perfect 4-0 the rest of the way if they want to find themselves in the SEC Championship Game for the first time in program history.

BACK ON TRACK: Ole Miss’ defense leads Rebels to…