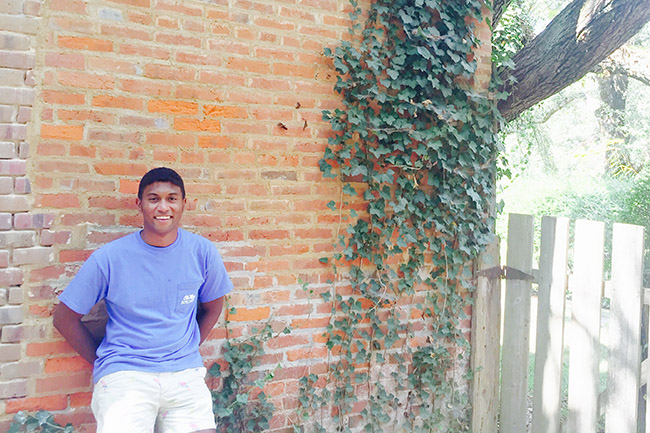 Submitted photo Terrius Harris has come from small-town Alaska to Ole Miss looking to leave a positive mark in Oxford by ensuring all he does is inclusive of others.

Terrius Harris has gone from small-town Alaska into the heart of the South and is making every second count.

Harris, a junior at the University of Mississippi, hails from Eagle River, Alaska, where the population is about 26,446 people, comparable to the UM student body.

The product of a military family, Harris came to Mississippi to live with his godparents his senior year of high school.

“I applied to 24 different schools,” he said. “I went to visit all of them and none of them were what I thought they were, or where I wanted to go.”

UM was his last attempt at finding a university. He enrolled and quickly began getting involved on campus. Today, he’s the secretary of the Black Student Union, an Ole Miss ambassador, and the state president and local chapter treasurer of Mississippi collegiate Delta Epsilion Chi, or DECA, a marketing association for students.

Harris said realizing “all of the social issues that are within Mississippi has helped me grow as a person.”

Kelly Loggins, a junior senator for the school of journalism at Ole Miss, said Harris always makes people feel important who talk to him.

“You can tell that he is really trying to leave a positive mark on our campus,” Loggins said.

Harris said wherever he is, he tries to make sure that the conversation is about being inclusive.

“I want to make sure people have an overall understanding of what they are saying,” he said. “Words give meaning, and words are very powerful to use, so that if you use them inappropriately, or you use them unknowingly, you are using a lot of that power you have as a person in a negative or uneducated way.”

Harris said it’s about making residents realize there is more to life than Lafayette County and Oxford.

One of Harris’ co-workers, Community Assistant Jerrard Juzang, a junior at Ole Miss, said Harris has made an impact on his experience at Ole Miss.

“I have lived in the same building as him for three years, and two of those years, we have been co-workers,” Juzang said. “Even after three years, he has introduced me to new things on and off campus that have positively affected me here in Oxford. He makes friendships the easiest out of anyone I know and maintains those friendships with relative ease.”

“I am a really deep believer in human connection and interactions that come with that make up that person’s story,” he said. “I look up to people based on their individual stories because those are important.”

Harris said the ability to feel connected to others should be cherished, not only in the moment, but also throughout the relationship.

He is also an advocate for the LGBT community, and is on the board of directors for a nonprofit called Quist.

“The main goal is to preserve the history and fight for it,” he said.

Harris said recognizing an encounter between someone or a culture can “unknowingly” introduce one another and connect us. That’s why he wants to work in the fashion industry after college.

“Clothes were inspired by some culture somewhere,” he said, adding that taking a design from a “native tribe only one person has seen or been to” can be a way to bring people closer. “Fashion does that,” he said.

“I feel, as humans, we focus too much on what success is defined by and what other people define it by, which brings that sense of validation we are looking for in our fellow mankind,” he said. “With that validation comes this idea that success is only defined as how many accomplishments you make and how much we do in life.”

Harris believes that a person’s success is “defined by how many lives you touch and how happy you are during that.”