JUST ANOTHER GAME: Revenge not on mind of Treadwell, Rebels against AU 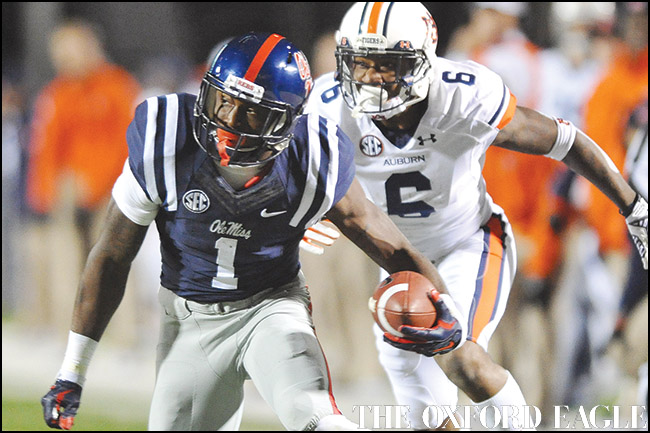 Hopes were still high for the Rebels’ season even after a 10-7 loss at LSU the week before. Playoff implications still existed as well as the Southeastern Conference West title and a trip to Atlanta.

That all changed that fateful Saturday night when Auburn defeated Ole Miss, 35-31.

Losing the game all but did in the Rebels’ high postseason hopes, but the loss of their best offensive threat for the rest of the season was even costlier.

Receiver Laquon Treadwell broke his leg and dislocated his ankle when trying to score what could have potentially been the game-winning touchdown.

With all of those factors in play with Ole Miss heading to Auburn on Halloween (11 a.m., ESPN), it would not be out of the realm of possibility to consider revenge being at the forefront of the Rebels’ minds.

But that could not be any further from the truth.

One goal
For someone who lost the rest of his season, and before the extent of the injury was known potentially his career, Treadwell is not a player that has been dwelling on the past. He is looking at the bigger picture, though there is one thing he wants to accomplish Saturday.

“They’re going to feel my pain,” Treadwell said. “I’m just going to play my hardest as I did last week, and my team will do the same. The SEC West title, there’s not really nothing else to be talking about. They’re another opponent in the way.”

This weekend’s matchup against the Tigers may have been circled on the calendar for some who are wanting to seek justice for what that loss nearly 365 days ago took away. When it comes to the one player who should have this game at the forefront of his thoughts, Treadwell did not even know it was Auburn week.

“I didn’t even know we played them this week until after the A&M game this week,” Treadwell said. “Once I found out, it sparked a fire in me. I don’t know where it came from, but I’m ready to play.”

That revelation is not uncommon for Treadwell, who has only known of one team they would be playing in advance. That was in Week 3, when the Rebels played Alabama.