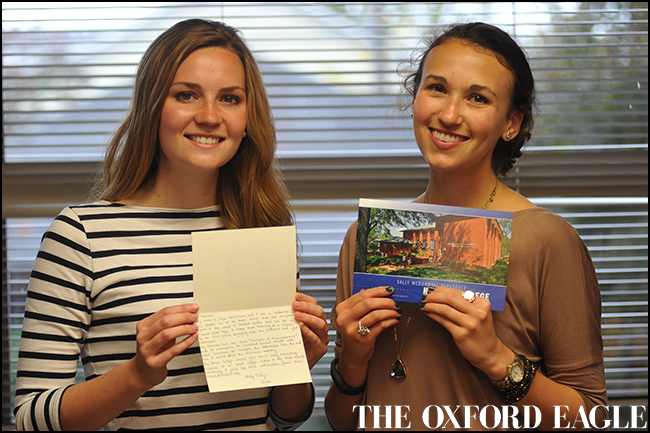 Cayla Cardamone, left, and Connor Holeman are among students at the Sally McDonnell Barksdale Honors College who send handwritten letters to prospective students, in Oxford, Miss. on Monday, October 26, 2015.

Honors students at the University of Mississippi are working to recruit new members of the Sally McDonnell Barksdale Honors College the old-fashioned way.

They aren’t using email, but instead, are hand-writing letters with hopes of recruiting students for the newly expanded Honors Ambassador Program.

Though the ambassador program has been in place at Ole Miss for many years, the new coordinator of recruitment and admissions at the Honors College, Jordan Troisi, who is now overseas, worked to greatly expand the program during the 2014-2015 academic year.

“One of the biggest benefits of our program is it connects to prospective students on a more intimate level,” Troisi said of incoming students. “Instead of just receiving a formatted acceptance letter, we put them in touch with current students who talk to them and answer their questions. It makes them feel more welcome.”

The typical duties of an honors ambassador include writing hand-written letters to prospective or committed students for the honors college, corresponding with students answering questions about the Sally McDonnell Barksdale Honors College and Ole Miss, and giving campus tours and tours of the honors college to incoming students.

Darby Hennessey, a sophomore in the University of Mississippi’s honors program, has been an ambassador for the past two semesters.

“I write four to five letters per week, so I’ve probably written close to 200 letters so far this year,” Hennessey says.

Hennessey, who received a hand-written letter from an ambassador herself while she was in high school encouraging her to apply to the program, said letters really make a difference to students when it comes to their decision about committing to the honors program.

“I was really touched that someone would go out of their way to write me a letter inviting me to the program,” she said, “so that really influenced my decision in wanting to volunteer for the ambassador program and give that same feeling to someone else.”

There are currently about 50 student ambassadors volunteering for the ambassador program, who each write four to five personalized, hand-written letters per week.

One of the program’s goals is to expand the number of student volunteers, enabling more letters to be sent out and reach even more prospective students.

One of the main long-term goals of the Honors Ambassador Program is to bring in more students, expanding the honors college. The honors college will undergo an expansion of its building this summer, in hopes of bringing in even more honors students and ambassadors.

BACK IN THE GROOVE: Rebels regain confidence for stretch…