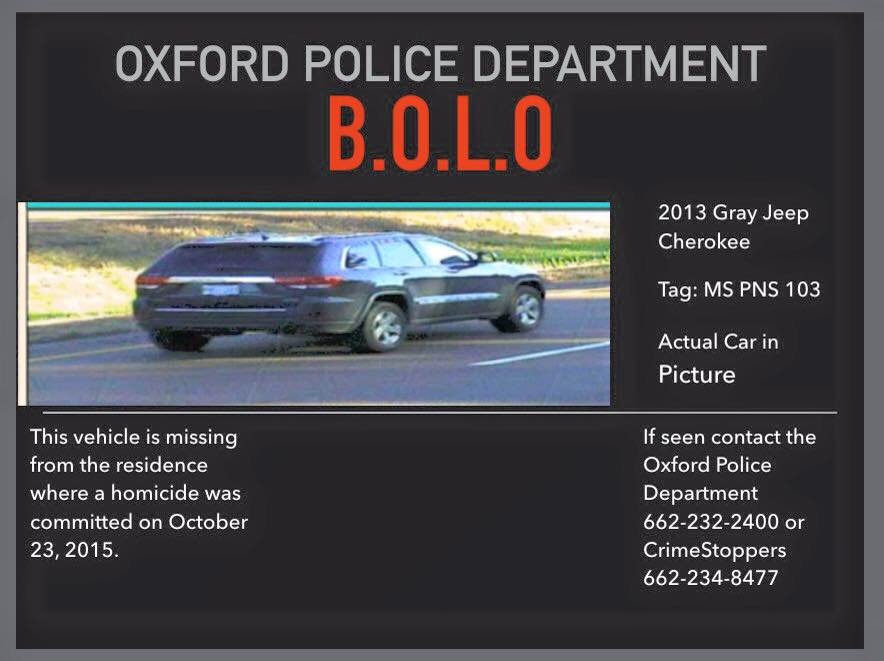 The Oxford Police Department issued a B.O.L.O, or “Be on the look out,” Monday for a vehicle owned by Kenneth Roberson who was found dead Saturday morning.

The vehicle is missing from Roberson’s home, 1004 Molly Barr Road, where officers found him dead after a family member contacted police with a concern for his safety.

A photograph of the missing vehicle, a 2013 Jeep Cherokee, gray in color, with Mississippi tag PNS 103 was posted on OPD’s Facebook page Monday afternoon.

“Citizens have a greater opportunity to spot this vehicle than just officers,” said OPD Maj. Jeff McCutchen this morning. “So we are invoking their help. This car could be anywhere.”

McCutchen said whomever has the vehicle could either be a suspect or know information about how Roberson died.

OPD is investigating the death as a homicide, even though the exact cause of death has not yet been determined. Roberson’s body has been sent to the State Medical Examiner in Jackson for an autopsy.

OPD Mag. Jeff McCutchen said Saturday that it was “possible” a firearm was involved.

Lafayette County Coroner Rocky Kennedy said the body has not been released back to his office as of this morning.

“The autopsy isn’t finished,” Kennedy said, who added he hoped to hear something today from the ME’s office.

McCutchen said the department does not have any suspects in custody as of this morning.

“We’ve interviewed friends, family and it’s basically Crime Scene 101,” he said. “We’re trying to build a foundation for this case and gather the information that will lead us in the right direction.”

Roberson owned the Kenneth I. Roberson Funeral Home in Pontotoc

Funeral services for Roberson, 52, will be held at 11 a.m. Friday at Macedonia M.B. Church in Brookhaven with burial to follow in Hillcrest Cemetery.

Anyone with information is asked to contact Oxford Police Department at 662-232-2400.