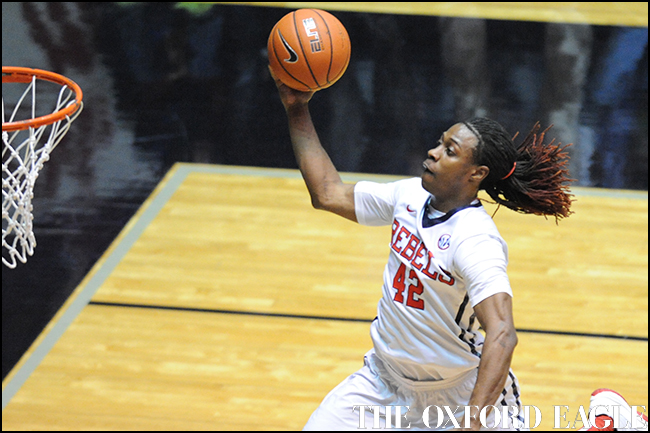 The good news for Ole Miss? Stefan Moody is back.

The bad news? Just about every other significant contributor from last year’s NCAA Tournament team isn’t.

The Rebels started preseason practice earlier this month in preparation for the season opener against Northwestern State on Nov. 13 with eight new players on the floor and four of their top six scorers from a season ago no longer around.

Gone is Jarvis Summers’ stability at the point along with fellow guard LaDarius White, the Rebels’ third-leading scorer a season ago. Ole Miss also took a hit in the frontcourt when M.J. Rhett’s lone year of eligibility came and went, Aaron Jones graduated and Dwight Coleby transferred to Kansas.

Moody, the league’s top returning scorer and a preseason All-SEC first-team selection, has a clean bill of health after having a stress fracture in his leg surgically repaired in the summer, and the Rebels return two more starters in guard Martavious Newby and forward Sebastian Saiz. But the Rebels have plenty of minutes to replace and roles to fill for a team that went 21-13 a season ago and made it to the NCAA Tournament for the second time in three seasons.

That starts with finding a replacement for Summers, who was just the second point guard in head coach Andy Kennedy’s 10-year tenure to start all four seasons. Junior college transfer Sam Finley is the favorite to step in there with freshman J.T. Escobar pushing for minutes.

“This is a new wave for me that I’ve got two guys — one’s a freshman and one’s a junior college transfer — that we’re asking to lead this team,” Kennedy said. “We’re giving them a lot of information and trying to overload them in a number of different ways, and I’ve been pleased with both of them.”

Transferring help
Junior college transfer Rasheed Brooks and freshman Terence Davis could also be in the rotation at guard. Senior Anthony Perez and Liberty transfer Tomasz Gielo, at 6-foot-9 and 220 pounds, will be counted on to stretch the defense with their shooting ability from the 4, or power forward, spot.

Gielo averaged 12 points and 6.3 rebounds a game for the Flame in seven games last season before a non-surgical stress fracture forced him to take a medical redshirt. Kennedy said his pair of forwards have the touch to combine for “70, 80, 90, 100 3s made.”

“I guess every team is different year in and year out, but this one is much more offensively versatile than any group that I’ve had,” Kennedy said.

One player Kennedy is looking to get more out of is Saiz, who averaged 7.6 points and 5.5 rebounds a game last season. But with much of the help he had in the frontcourt gone from a season ago, Saiz, who’s up to 240 pounds, will be counted on to handle nearly all of the production on the interior.

“I’ve challenged (Saiz) to be a double-double guy,” Kennedy said. “Go lead the SEC in rebounding. I think he’ll have the opportunity to do that.”

As for Moody, the senior guard said he’s back to his usual bouncy self after the surgery on his leg back in June that kept him out of basketball-related activities for a couple of months.

“As of right now, it feels better than before,” said Moody, who averaged 16.6 points a game a season ago. “The crack is smaller. Now I’ve got a rod in it, so anything that could hold me back would be from the mental aspect of it.”