WORK IN PROGRESS: Rebs ‘continue to work’ to get back to defensive basics 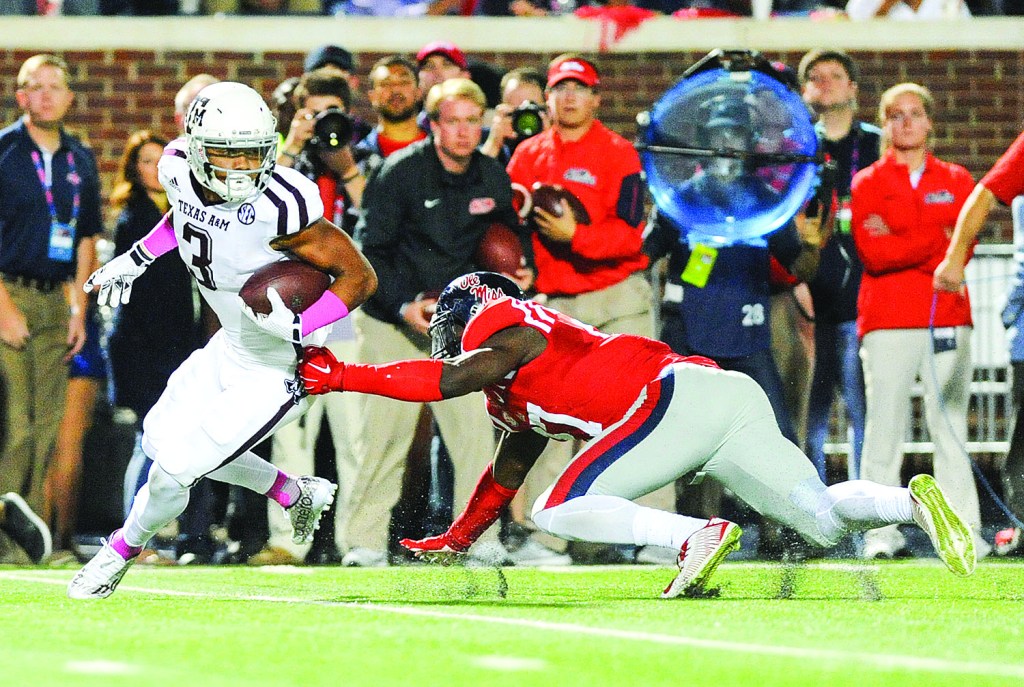 Most of it was the play of quarterback Paxton Lynch as well as his running backs. The other half of the blame came from the poor tackling by the Rebels’ defense.

There were 30 missed tackles against Memphis leading to the 37-24 loss at the Liberty Bowl.

That effort led many players to question whether the tackling, or lack thereof during fall camp, led to the inability to bring opponents to the ground in a timely manner.
Defensive coordinator Dave Wommack and his staff went back to work last week and shored up some things they felt were fixable.

Those changes paid off as the 19th-ranked Rebels cut their missed tackles down by more than half against Texas A&M to 11.

“With injuries that have occurred and knowing we were playing 10 straight games, we backed off on some of the physical aspects of practice,” Ole Miss coach Hugh Freeze said. “Tackling has been cut back a decent amount. Last week, we made a decision on that. We still need to focus on that because we still missed I think 11 tackles. Some of it had to do with (Texas A&M). They had some good players, but our fundamentals were a lot better.”

Last week, the Rebels had six tackles for loss, totaling 27 yards. Marquis Haynes accounted for three of those tackles for 22 yards.

The progress is something that pleases Wommack, but it is still an upward climb to eliminating missed tackles all together.

With four more Southeastern Conference teams remaining to close out the regular season starting at Auburn this Saturday (11 a.m., ESPN) there is still plenty of work to be done.

“I think we’ve still got to keep working on it,” Wommack said after Tuesday’s practice. “I still think 11 tackles is a lot of missed tackles. In a close game, it’s going to cost you a game. So absolutely we worked on it (Tuesday), and we’ll continue to work on it.”

Back to normal
With the return of Laremy Tunsil to the offensive line, the Rebels are able to finally have some normalcy up front.

It allowed the rest of the offensive linemen to return to their regular positions, excluding Justin Bell, who is splitting center duties with Ben Still due to Robert Conyers being out the rest of the year.

Fahn Cooper was one of those to benefit getting back to his “home” at right tackle Saturday against Texas A&M.

“It feels good,” Cooper said. “I feel like right tackle footwork feels a lot more comfortable just because I’ve taken so many reps in that spot. It definitely feels good and it feels good to have LT (Laremy Tunsil) back out there.”

For Cooper as well as the rest of the unit, taking snaps at their original positions during practice is something they have not been able to do throughout the first seven weeks of the season as Tunsil was serving a suspension for violating NCAA rules.

On Saturday night, the feeling on the offensive front was a 180-degree change from what the atmosphere was like the first half of the season without their future NFL draft pick lining up next to them.

“I feel like just having different guys work back with guys that they were used to working with, that’s the first time I’ve worked double teams with Rod Taylor since middle August,” Cooper said. “It definitely makes it fun just to have one of your close friends back out there with you, grinding to win these last couple games and get to Atlanta.”

Core comes home
Saturday will mark the second time wide receiver Cody Core will have a homecoming of sorts.

The Auburn, Alabama, native grew up attending games at Jordan-Hare Stadium and is getting the chance to play in front of his friends and family.

“It’s great,” Core said. “My last year, going home and kind of represent for the hometown at a different school, it’s going to be awesome.”

It will be the second time Core has suited up at his hometown stadium, but he did not play much in the Rebels’ 30-22 loss in 2013.

This time around, he will get to take the field in a much more prominent role on the offensive side in a game that has SEC West title implications.

“It’s going to be awesome,” Core said. “Knowing (my family) is going to be out there supporting me, I feel like I can’t let them down.”

BACK IN THE GROOVE: Rebels regain confidence for stretch…