SENATOBIA — For the first time since 2010, Northwest Mississippi Community College will host a playoff game at Bobby Franklin Field.

NWCC (8-1, 5-1 MACJC North) will entertain East Central (7-2, 4-2) on Saturday at 2 p.m. Both teams are ranked nationally in the NJCAA polls. The Rangers are making their 26th trip to the playoffs in the last 34 years while the Warriors are postseason bound for the first time since 2001.

Both teams will play at different venues after a surprising ruling by the MACJC last Friday. Due to the disqualification of East Mississippi from the playoffs for a bench-clearing brawl that occurred during the Lions’ game Oct. 22 at Mississippi Delta, ECCC will travel to Senatobia instead of Scooba and Northwest is now the No. 1 seed from the MACJC’s North Division.

Northwest and East Central last met in the postseason back in 1999, the same year of the Rangers’ last football state championship. Northwest won that game 40-12, and a week later, defeated Hinds 33-21 to claim its eighth state title. The two teams have played a total of 46 times dating back to 1947 with Northwest leading the all-time series 27-18 with eight consecutive wins over the Warriors.

Northwest boasts the MACJC’s second-best and nation’s ninth-ranked offense at 488.2 yards-per-game, a nice balance of 292.3 passing and 181.7 rushing. East Central is seventh in the league and 33rd nationally at 376.4 yards/game. 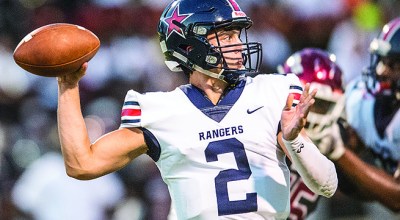 WORK IN PROGRESS: Rebs ‘continue to work’ to get…