State legislator candidates focus on I-42 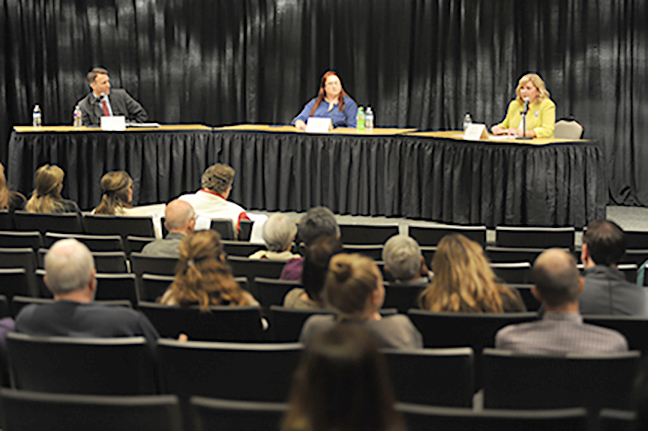 Gray Tollison and Cristen Hemmins speak during a debate for Mississippi District 9 senate at the Oxford Conference Center on Wednesday.

While candidates for House District 12 and Senate District 9 were given a chance to speak about any topic they chose during the debate held Wednesday at the Oxford Conference Center, the main focus of the entire debate was education and Initiative 42 with a few other topics mentioned briefly, like Public Employees’ Retirement System and funding Medicaid.

House Democratic candidate Jay Hughes said he considered running for office because he was “sick and tired” of Mississippi being on the bottom in the nation on several issues, including education and health care.

But it was an act of the Legislature that made him decide to throw his hat into the political ring.

Last year, a group called Better Schools, Better Jobs mobilized thousands of volunteers to collect signatures on petitions to put a proposed constitutional amendment on the November 2015 ballot. Initiative 42 would require Mississippi to fund an “adequate and efficient system of free public schools.” If legislators fail to provide that, the proposal specifies that people could ask a chancery judge to order the state to provide the money.

Shortly after, the Legislature devised an alternative, Initiative 42A to be put on the ballot.

“Never did I believe I’d see the day when our elected leaders, including my opponent, would use official offices, our tax dollars and every trick in the book, in an attempt to crush the right of the people to have a fair and honest vote on their initiative,” Hughes said in his opening statement.

Republican incumbent Brad Mayo said he does not support Initiative 42.

“But I will make sure if it passes, when re-elected, to take the appropriate measures that will enact it,” Mayo said. “If it passes and the Legislature must try to implement the MAEP program to avoid lawsuits, I’ll be in there to make sure we fund our schools and protect our district.”

The state’s school budget formula, the Mississippi Adequate Education Program, is designed to give schools enough money to meet mid-level academic standards. It has been fully funded only twice since a Democratic-controlled Legislature put it into law in 1997 over the veto of a Republican governor. Educators say the formula has been shortchanged by $1.5 billion over the past seven years.

Hughes said Initiative 42 would help pull Mississippi up from being one of the lowest-scoring states in the nation for education.

“There are 50 states, 49 with a constitutional requirement to fund education and Mississippi does not have it,” Hughes said. “The Legislation approved a four-page law in 1997 requiring them to fully fund education. They cannot ignore it any longer.”

When asked what other issues did the candidates think were important to Lafayette County, Hughes said his main focus is education as “it all starts with education,” however he mentioned health care being an issue. He said the Legislature needs to also fully fund Medicaid.

“We can pretend all we want by cutting it off somehow we made the problem go away,” Hughes said. “You and I are still paying for people getting sick. Our health care facilities are treating people for free (when someone doesn’t pay). We’re losing our rural hospitals and physicians.”

Mayo said the state couldn’t afford to fully fund both education and Medicaid.

Senate District 9 candidates incumbent Republican Gray Tollison and Democrat Cristen Hemmins were the last to take the stage during the debate, sponsored by the Oxford EAGLE, SuperTalk 93.7 and the conference center. And like the House candidates, education was again the focus.

“Education is the key for better jobs and a better quality of life,” Hemmins said in her opening statement. “I will work hard every day to protect and improve schools.”

“We are making progress,” Tollison said. “A journey of 1,000 steps begins with small steps,” Tollison said. “I’ve supported funding education throughout my career. If a candidate is measured by how much they’ve voted for to fund education, it’s been a billion dollars since I started in 1996 … We’ve also raised teacher’s pay from about $27,000 to $43,000.”

Tollison said he is concerned that Initiative 42 would have unintended consequences if passed.

Hemmins said she is a proud supporter of I-42 and was one of many who helped garner the signatures to get the initiative on the ballot.

“The initiative amendment is ridiculously confusing,” she said. “If they could have put it in Russian they would have, just to further confuse the voters. I want to make sure our kids have access to good schools. If we don’t pass 42, we’re at status quo. The Legislature cannot ignore their own law any longer.”

Tollison said if I-42 passes, one of the unintended consequences would be a freeze on all funding.

“You’ll have two years of litigation determining the constitutionality and there will be a freeze on everything,” he said. “If I want to increase funding for pre-K, it won’t happen because this will put us in flux and in limbo for more than two years. It’s my job to look ahead and decide what impact this will have on our state.”