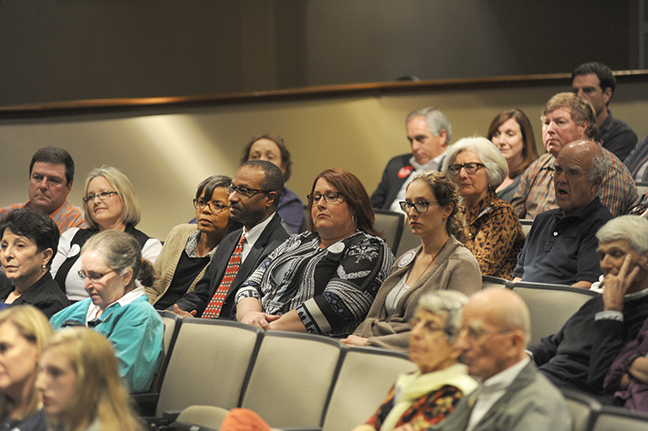 People listen to the candidates during a debate at the Oxford Conference Center on Wednesday, sponsored by the Oxford EAGLE and SuperTalk 93.7, as well as the center.

Lafayette County Board of Supervisor candidates focused on growth and issues accommodating that growth during a political debate held Wednesday night at the Oxford Conference Center, hosted by the Oxford EAGLE and SuperTalk 93.7.

When asked what they felt were the biggest issues facing the county, all three mentioned the county’s unprecedented growth and keeping up with infrastructure to meet the demands of the growing population.

Hyneman brought up projected population numbers that say by 2037 more than 70,000 people are expected to be living in the county. Currently, there are about 55,000 residents.

“I would have never imagined seeing those kinds of numbers,” he said. “Growth needs to be handled in a responsible manner and how you manage it is the key. Improvements to roads, facilities and water systems are necessary.”

Frye said along with roads and water systems, fire and police also need to be an important focus of county leaders.

Babb said while campaigning, the biggest concern he has heard from residents in District 1 is having safe roads and bridges.

“Our school buses travel over these roads every day,” he said. “Some roads are unsafe. We’re doing a good job on the majority of roads but there are some people who are very concerned about it.”

While dealing with growth, it’s hard to avoid the “z-word” and the candidates spent much of their time during the debate discussing zoning and their stance on whether the county is ready for it.

“One candidate has said he is against it. One has said they’re for it. I’m the one who said we need smart, responsible planning and we need to talk about how we’re going to do that,” Frye said. “There needs to be a lot of conversation. If zoning is the answer then it’s the answer, but I’m not willing to sit up here and say zoning is the answer.”

Hyneman said there are misconceptions about zoning, with some people believing it would take away their property rights.

“It actually provides security in your property,” he said. “But if elected, I will spend the first day on the job listening to what the concerns are of those living in all of the districts because it’s not just about District 1. First step is update the comprehensive plan and go from there and see where it leads.”

Babb is concerned if zoning is implemented, it would increase property taxes.

“We want our children to be able to live here in Lafayette County,” he said. “If costs for land and building go up, it’s going to be harder for people to buy or build the houses they want. It can limit property rights. There are other ways to deal with growth, like in subdivisions which have covenants and restrictive land deeds.”

“You, your neighbor or co-worker can be affected if a firing range or fireworks stand wants to go up in your neighborhood,” he said. “Now, the board throws up their hands because there’s nothing they can do about it.”

Frye said the county should also focus on economic development.

District 3 candidates, Republican David Rikard, Democrat Dale Timothy Gordon and Independent Zack Carey also addressed growth as the county’s biggest issue today. None of the three candidates took a strong stance on zoning and all felt it should ultimately come down to a vote by the citizens.

“Some are for it, some are against,” Gordon said. “Everyone should have the opportunity to vote on it. I will look at it, consider it, see if we can space it out across the county. Then give people enough information so they know what is in the zoning package.”

Carey, originally from DeSoto County, said he does not want to see Lafayette County grow the same way as his native county.

“The city has these laws restricting buildings from being too high, and they do this to preserve what is unique about the city and that’s what I want for the county. But if the voters want it differently, I’ll do whatever the voter wants.”

Rikard said whatever the county decides to do, giving the most information possible to the county residents will be key for acceptance and implementation.

“We need town hall meetings, publications in the newspaper and to answer our phones,” he said. “We need to give voters as much information as possible. Lafayette County is a unique place and we need some type of protection for that. But we need residents’ input in how to go about that.”

Gordon said he would like a chance to study zoning and whether it can be done where areas closest to the city may have some zoning while others, further in the county would not.

Rikard pointed out that the county cannot legally zone parts of the county but must zone all of it. However, the zoning can be different in areas.

“I was at a planning commission meeting recently and there was an elderly couple there because a commercial business was being built right next to their home,” he said. “Some type of regulation is needed, not to tell you what you can’t do but to protect you.”

Carey said he would bring in land use experts and then put it to a vote.

“The next thing we need to be concerned about is annexation and there’s a whole lot to do to stop it,” he said.

District 5 Supervisor Mike Roberts, who is running for re-election, was the only one at the table for his district debate. His opponent, Johnny Mike Fortner, did not attend the debate. Roberts spoke briefly about the accomplishments of the current board, including building several new roads.

“I’d like to continue to serve the county and help guide its growth,” Roberts said.

State legislator candidates focus on I-42