9 Lives to close in November 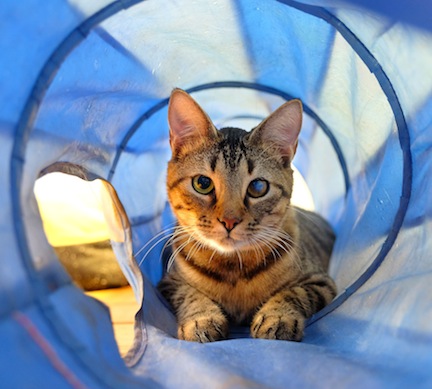 For 10 years, Natascha Techen has been a champion to feline residents needing forever homes. Co-founder and president of 9 Lives Cat Rescue, Techen has worked tirelessly running the area’s only no-kill shelter for cats.

However, it’s time for her to move on and hopefully, pass the torch to someone else.

Techen, a biologist and research scientist at the University of Mississippi, will be

moving to Senatobia soon so she and her husband, who works in Memphis, will live somewhere in the middle of where the two work.

Techen will close the doors to 9 Lives at the end of November and she and her staff of volunteers are desperately trying to find homes for the remaining 30 cats that still call 9 Lives home.

The choice was not an easy one for Techen to make, who becomes emotional when talking about her feline friends, some of whom she has raised since they were kittens.

“There is one that’s been here six years,” she said, her voice cracking with emotion. “This is very hard.”

Techen said she has contacted regional no-kill shelters around Mississippi and some have agreed to take a few of the cats if they can’t find homes.

“I have only spoken with no-kill shelters and there isn’t that many of them,” she said. “They can only take two or three cats. We are pretty desperate.”

Nine Lives was founded by Julie Holman and Techen, and was set up in the basement of Holman’s house. When she left Oxford six years ago, Techen took over the running of the organization. The rescued cats were moved into a dedicated structure where the cats are able to wander around, look out the windows, and enjoy lounging in a screened-in porch.

Techen has overseen countless cat surgeries, long medical treatments, saving eyes and limbs, curing infections and in some cases, bringing some cats back from death’s door. She has helped teach the cats to trust people again, socializing feral cats to make them more adoptable.

All of the cats at 9 Lives are spayed/neutered and vaccinated.

Techen said she would be thrilled if someone wanted to take over 9 Lives and would be willing to help that person get adjusted. But with the days quickly passing by, the main concern is finding new homes for the cats currently in the shelter.

She said she hopes one day Oxford has a low-cost spay and neuter program where shelters and rescue groups like hers are no longer needed.

“The need is still there,” she said. “So many can’t afford to get their cats neutered by a veterinarian. Some people take care of feral cats near their homes but they don’t have the resources to get them all spayed or neutered, nor able to catch them to do it. That’s where my team came in.

“If we had a reduced clinic here, our overpopulation of unwanted cats and dogs wouldn’t be a problem any longer.”