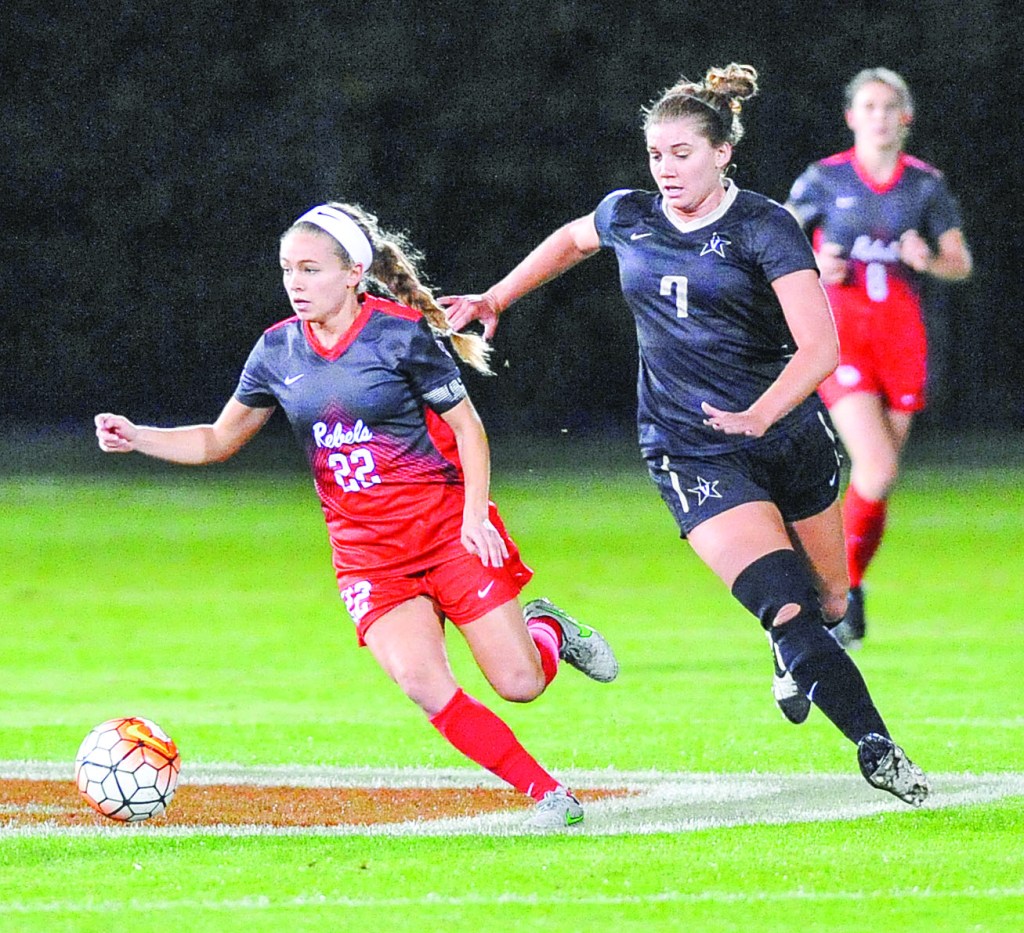 Heading into its final regular-season match, 12th-ranked Ole Miss had nothing to lose but a lot to gain.

With a win over Vanderbilt and some help from Florida and Missouri, the Rebels could have secured a Southeastern Conference regular-season championship.

The night did not go according to plan for Ole Miss, losing 1-0 to Vanderbilt on a late goal Thursday night at the Ole Miss Soccer Complex. The loss snapped a five-game winning streak, but the Rebels (14-3-2, 8-3-0 SEC) won eight of their last 10 matches dating back to Sept. 20.

“I think (Vanderbilt) had a really good game plan,” Ole Miss coach Matthew Mott said. “They made it tough for us. They battled really hard. I thought if we could have gotten one early, it would have opened them up a little bit and they would have had to chase a little bit. Credit to them, they sat really deep and defended really hard. They did a good job of keeping our chances limited.”

The goalkeepers got work in early and often in the first half with both teams getting shots on goal but unable to break the seal off the net to keep it scoreless at halftime.

Rebel goalkeeper Marnie Merrit had three saves in the first 45 minutes of play while Ole Miss took eight shots on the Commodores’ goal.

The stalemate continued for 40 more minutes of the second half until Lydia Simmons found the back of the net to put Vanderbilt up 1-0 with just more than five minutes left. It was the only shot on goal for Vanderbilt in the second half, and it was Simmons’ first goal of her career, which came at an opportune time for the Commodores.

Besides the one blemish late in the match, Merrit was solid for the Rebels in the goal all night, which has become a common occurrence for the true freshman all season.

“She’s been really good,” Mott said of Merrit. “She made another good save in the first half. She’s really maturing, and I think she’s one of the best goalkeepers in our league and she showed it again tonight on a good save. I’m really, really happy with her.”

Ole Miss cannot say it did not have its chances Thursday night, taking 11 shots on goal in addition to four corner kicks.

Seniors honored
It was Senior Night for the Rebels as they honored all seven seniors before the match. This is the first group during Mott’s tenure that has played for him all four years.

“They’ve been unbelievable,” Mott said. “They’ve changed the culture, they’ve changed the expectations and the standards. They’re just so special and such a special group. They played really hard tonight. I don’t hate the way we played. I hate that we couldn’t find (a goal). You’ve got to give credit to Vanderbilt.”

Beach bound
A year ago, the Rebels were dealt a heartbreaking blow to their postseason hopes, losing to Tennessee on the final day of the regular season and being eliminated from the SEC Tournament.

Fast forward 365 days and Ole Miss is sitting comfortably with the No. 3 seed, earning themselves a bye into the quarterfinals of next week’s tournament at Orange Beach, Alabama.

Going from feeling the stress of not knowing if you will be in the tournament to vying for the No. 1 seed down the stretch shows the progress the program has made under Mott’s control.

With an RPI in the top 20 and a top-15 ranking, a good run in the SEC Tournament could have the Rebels eying a host bid for the NCAA Tournament in a couple weeks.

“Last year this time, our season was over,” Mott said. “I’m certainly happy we’re moving on and we’re in the SEC Tournament and the NCAA Tournament. So we have those things to look forward to, but we’re going down to the beach with the idea of winning the tournament. That’s our focus for sure.

The Rebels will open the SEC Tournament on Wednesday against No. 6 seed Texas A&M at 2:30 p.m. on the SEC Network.

KEEP IT GOING: Chargers look to stay perfect in…