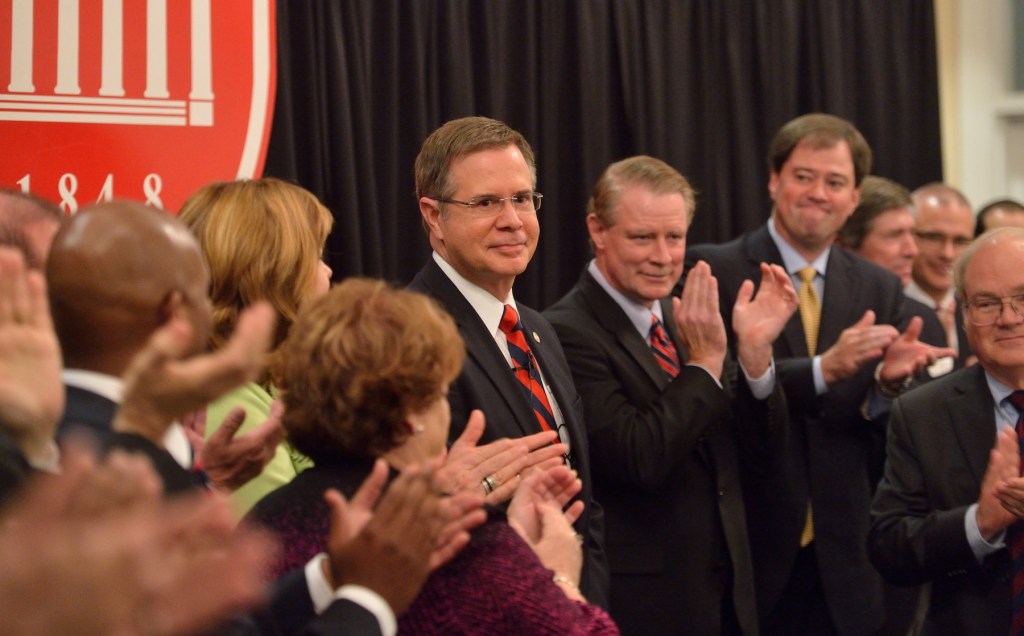 Jeffrey S. Vitter smiles after being named the 17th Chancellor of the University of Mississippi. Photo by Kevin Bain/Ole Miss Communications

Jeffrey S. Vitter is the new chancellor of the University of Mississippi.

State Institutions of Higher Learning HL President Alan Perry made the announcement Thursday in Oxford. His start date has not been announced.

Last week, IHL trustees named Vitter their preferred candidate but needed to go through a few more steps before naming him chancellor, which included holding listening sessions on both campuses, in Oxford and Jackson.

The Oxford faculty and students got the chance to meet Vitter during several listening sessions for faculty, staff, students, alumni and the community. At 2:30 p.m. the board met to cast its vote.

“I am happy to announce as president of the trustees, we unanimously and enthusiastically have chosen Jeffery Vitter as our new chancellor,” Perry said following the vote. “It’s a big day for Ole Miss.”

After IHL decided not to renew former chancellor Dan Jones’ contract earlier this year, a 34-member Campus Search Advisory Committee that was headed up by Alice Clark, vice chancellor for research and sponsored programs. Clark served as the chair in 2009 when Jones was hired as chancellor.

The committee weeded through a long list of applicants and narrowed it down to eight. Perry said Vitter was always a top contender.

“I am honored to be given this opportunity by the Board of Trustees and the Ole Miss family,” Vitter said. “I hold a profound respect for the University of Mississippi and understand the responsi- bility with which I have been entrusted. As chancellor, I commit, with wholehearted enthusiasm, to building on its rich history to foster excellence and lead the university forward.”

Vitter recently served as provost and executive vice chancellor and the Roy A. Roberts Distinguished Professor at the University of Kansas. His academic home is the Department of Electrical Engineering and Computer Science and he is a member of the Information and Telecommunication Technology Center.

KU includes the main campus in Lawrence, with 10 colleges and schools, the Edwards Campus in Overland Park and the Medical Center campuses in Kansas City, Wichita and Salina, Kansas. As provost, Vitter is the chief academic and operations officer for the Lawrence and Edwards cam- puses.

Vitter initiated and co-led the campus-wide development of KU’s strategic plan, “Bold Aspirations: The Strategic Plan for the University of Kansas, 2012- 2017.” The plan is the university’s transformative road map toward its vision of excellence as a top-tier public international research university.

While at KU, he created the first-ever university-wide KU core curriculum; oversaw major facilities improvements and expansion; and led the expansion of the schools of Engineering, Business and Pharmacy.

Before coming to KU, Dr. Vitter held a similar post at Texas A&M University. He served as the Frederick L. Hovde Dean of the College of Science and professor of computer science at Purdue University. He held a distinguished professorship at Duke University and served at Duke as chair of the Department of Computer Science. He had earlier progressed through the faculty ranks and in leadership roles at Brown University.

His educational degrees include a B.S. with highest honors in mathematics in 1977 from the University of Notre Dame; a Ph.D. in computer science under Professor Donald Knuth in 1980 from Stanford University; and an M.B.A. in 2002 from the Fuqua School of Business at Duke University.

His hometown is New Orleans, Louisiana, and he and his wife Sharon have threechildren.

Last spring, the IHL decided not to renew former Chancellor Dan Jones’ contract. Trustees cited contract management issues at UMMC and Jones’ reluctance to correct them, as reasons for the non-renewal.

After several protests on the Ole Miss campus, a new offer was made to Jones, which he declined. When Jones’ six-year tenure was up on Sept. 14, he went to work at the University of Mississippi Medical Center as the director of clinical sciences for the Mississippi Center of Obesity Research.

“The search committee of the board stuck to the fundamentals,” Douglass Sullivan Gonzalez, dean of the Sally McDonnell Barksdale Honors College and professor of history. “They have brought a candidate who has high credentials in the academy, a proven track record with professors and an openness and a willingness to engage our university and take us to the next level.”