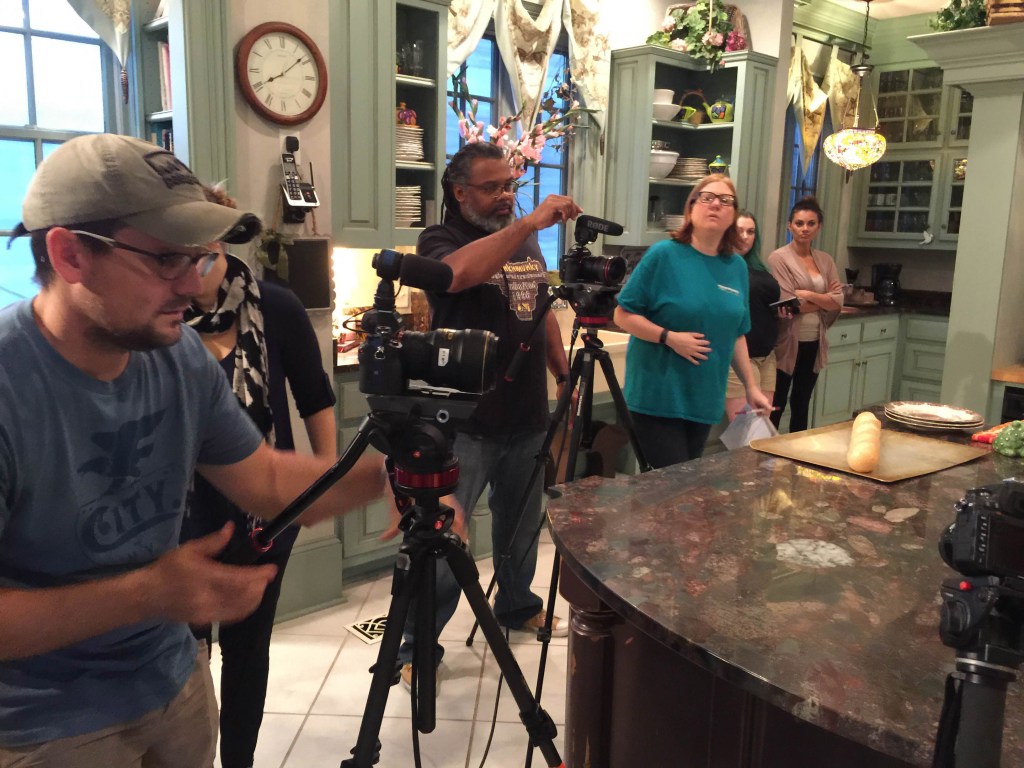 Danny Klimetz, from left, director of photography; Derek Brown, editor; Melanie Addington, producer; Whitley O’Neal, makeup, and Kimberly Adams, hair, are on the set of “Once A Month,” the community film that will debut during the Oxford Film Festival in February.

Local filmmaker Alex Thiel has been able to take his art to new levels thanks to the OxFilm organization that rents film equipment to local filmmakers.

“I’ve used OxFilm equipment for a number of things, from filming comedy sketches, to various promos for friends’ projects,” Thiel said, “to full-blown music videos. I also was able to use the equipment for a shoot with Terry Adams, a BMX flatland rider, that OxFilm and Red Bull promoted.”

Thiel has been able to use a camera, lens kit, zoom recorder, boom mic and shoulder mounts.

“But the dolly is by far my favorite piece of equipment they have,” he said. “OxFilm helps me take everything I shoot to a next level of production value. They make it super easy for students and locals to access, and they couldn’t be nicer people.”

It is now co-run through YAC and Oxford Film Festival.

OxFilm is a community-wide effort to enhance film as a cultural, artistic and economic driver for the Lafayette County-Oxford and University population. OxFilm seeks to promote education and provide tools to support local filmmakers while encouraging films to be made in our community. OxFilm also seeks to enhance existing film screenings with an ongoing series celebrating a range of film experiences.

“We provide film equipment to rent at any time in the year,” Addington said. “Members get hefty discounts on the rentals although anyone can rent it at an affordable cost.”

Cathead Vodka gives OxFilm a grant twice a year to support films in the state. The first two recipients of the $300 grants were Michael Fant and Jessi Hotakainen.

“We have another grant cycle with submissions due Jan. 1 as well,” Addington said. “People can apply online at oxfilmsociety.com.”

In 2016 OxFilm will be launching monthly meetings that will range from workshops on varying topics including intellectual property, using film equipment, to social gatherings to talk about upcoming film projects.

“We are currently using the camera to make an updated LOFT video and I will use it during the festival each year,” Addington said.

The cameras and equipment also were used to film this year’s community film that will be shown at the Oxford Film Festival. The name of the film is “Once A Month.” Written as a short story by Tom Franklin, it was adapted into a 10-minute play by Kate Leslie a few years back and was featured during the 10 Minute Play Festival by Theatre Oxford.

“Our director, Alice Walker, thought it would make a great film since then,” Addington said. “So we adapted it into a screenplay this year. It is local from its beginning.”

OxFilm was selected to produce the film for the festival, instead of bringing in a professional crew, and having community members be involved as actors.

“We wanted to focus on training people on making a film,” Addington said. “So we had a range of expertise from first-time to film students to some who work in films in Mississippi be part of the crew to make the movie.”

“There is also a surprise guest actor that we don’t want to give away as it is part of the surprise in the film,” Addington said.

“Once A Month,” will have its premiere on the Thursday night of the festival in February after Thacker Mountain Radio.