SEALING THE DEAL: Chargers hold off Ellington, Center Hill for 1-5A title 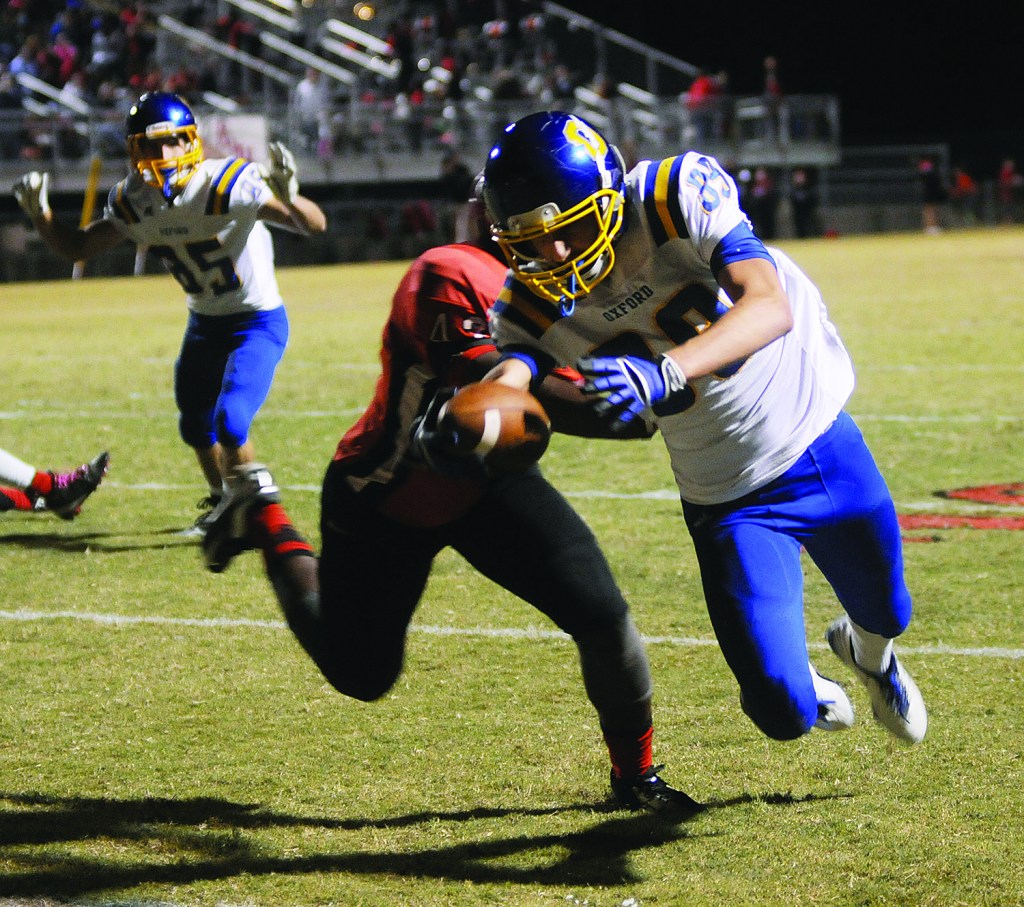 Oxford's Jimmy Greaser lunges past a Center Hill defender for the endzone during the Chargers' 54-30 victory.

OLIVE BRANCH — After the game was over, Oxford coach Johnny Hill walked over to Center Hill quarterback Danterius Ellington to tell him one thing.

“I told him he was as quick as a hiccup,” Hill said.

Ellington was the primary focus for the Chargers’ defense heading into Friday’s matchup, and for the most part, they did their job.

The senior quarterback gave Oxford problems in the early going, but the Chargers managed to pull away for a 54-30 win at Center Hill High School.

The win, paired with Lake Cormorant’s 21-19 loss at Clarksdale, gave Oxford (8-2, 6-0 Region 1-5A) the region title for the third consecutive year.

It was not an easy victory for the Chargers as Center Hill (5-5, 3-3) made life difficult in the opening quarter.

The Mustangs marched down the field on the opening possession, capping it with a 5-yard touchdown run by Ellington.

It was apparent by Oxford’s possession the game could be heading toward a shootout when quarterback Jack Abraham hit receiver D.K. Metcalf for a 50-yard touchdown pass on the very first play of its drive. Center Hill’s lead was cut to 7-6 after a failed two-point attempt.

Quick strikes were a part of the Chargers’ offense all night.

“We started telling ourselves it was going to be a track meet,” Abraham said. “But our defense stepped up and played well.”

Ellington and the Mustangs did not go away quietly as he completed a 3-yard pass to put Center Hill back in front 14-6 on their next possession.

That score was followed up by another Abraham-to-Metcalf connection, this time from 34 yards out to make it 14-12 after a second failed two-point attempt.

Oxford’s defense started to flex its muscle late in the first quarter, causing a Center Hill fumble, which the Chargers recovered. Abraham made the Mustangs pay with a 33-yard touchdown pass to tight end Zach Cousar to make it 19-14, putting the Chargers out front for good.

Center Hill hit a 31-yard field goal with nine seconds left in the quarter but was held scoreless until the fourth quarter.

Ellington added two more touchdowns, one by foot and one by arm, but it was after Oxford had jumped out to a 40-17 and 47-23 lead, respectively.

The defense kept the Mustang offense in check after the first quarter, causing two turnovers on downs and forcing Center Hill to punt much of the second and third quarters. Ellington was still a pain in the Oxford secondary, gouging them for runs or passes down the middle of the field. But the Chargers responded when they had to.

“We’ve been practicing this all week,” defensive back D.Q. Thomas said of preparing for Ellington. “We just put our best tacklers in. Our best open-field tacklers really. We just did what we had to do.”

Another milestone
Abraham finished the night completing 20 of 25 passes for 336 yards and five touchdowns, pushing the senior over 10,000 yards passing in his career at Oxford. Abraham has surpassed his own records or set new ones with each passing week this season.

“Jack got 10,000 yards, but you got to understand that (offensive) line gave him time to throw, receivers had to catch the ball,” Hill said. “Even though Jack gets that honor, it’s to the whole offense.”

Running backs Hiram Wadlington and Josh Patton each had rushing touchdowns from 2 and 36 yards out, respectively. Metcalf had a career game, making seven catches for 182 yards and three touchdowns. The 182 yards is a new career-best for the Ole Miss commit, besting a 168-yard effort against West Point in the regular season last year.

Persuit of perfection
The game does not hold much meaning anymore with Oxford clinching the region title on Friday, but the Chargers are not going to let up against Lake Cormorant in the regular-season finale next week, knowing they can go a perfect 7-0 in region play.

“We can’t go backward,” Hill said. “This is not the time to go backward. We’ll just have to check Lake Cormorant out, see what they got and go from there.”