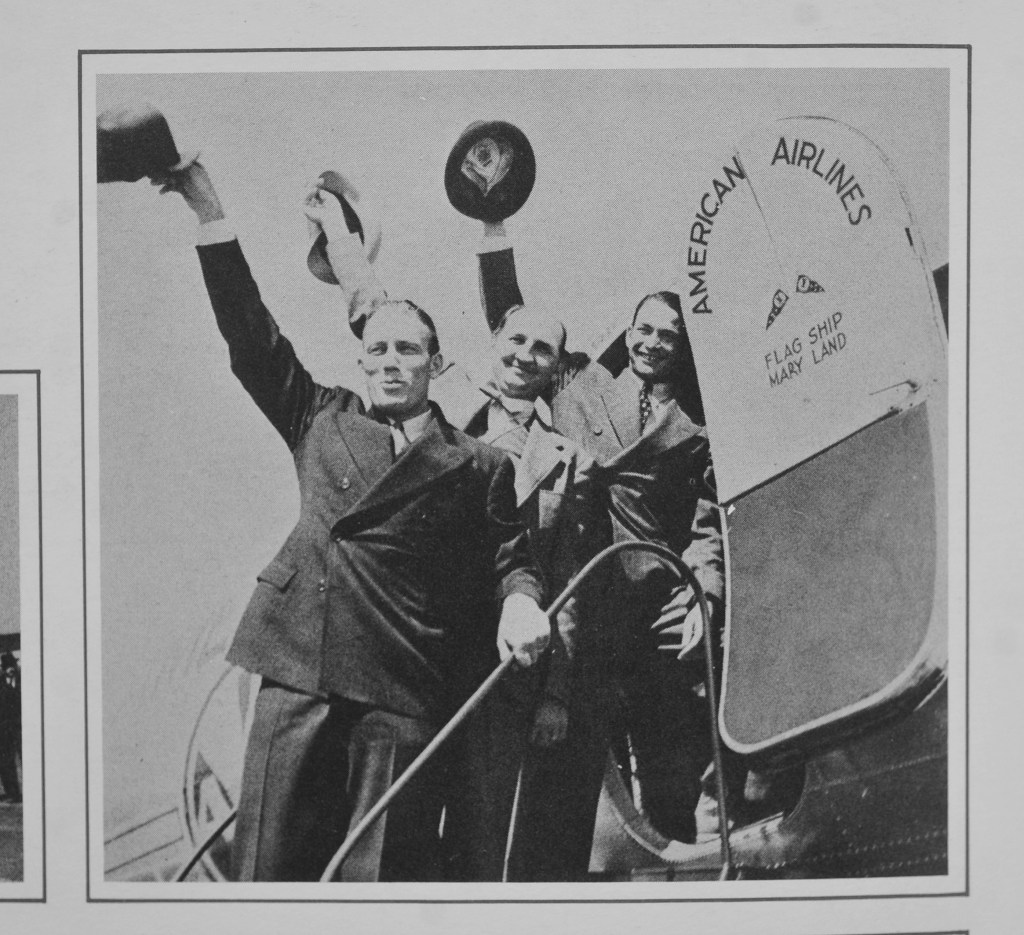 Ed Walker’s last team at Ole Miss made history with the nation’s first flight by a college team. Bruiser Kinard, Ed Walker and Ray Hapes paused at the door of American Airlines flagship “Maryland” to wave to reporters before leaving Memphis for Philadelphia for a game with Temple.

Last week I gave you some historical information on the naming of the Ole Miss athletic teams in 1929 when our teams were nicknamed the “Mississippi Flood.” The name did not catch on with the students or anyone else. Sportswriters, students, alumni and friends of the University of Mississippi reverted back to the old nickname, the “Red and Blue.”

In the school year of 1935-1936, Ole Miss had a very successful football program. They were invited to play Catholic University of Washington in the New Year’s Day 1936 Orange Bowl. The Catholic team beat Ole Miss 20 to 19.

During the 1936-37 football season, Dr. David G. Sansing writes in his book, “The University of Mississippi: A Sesquicentennial History,” when an unimaginative sportswriter referred to the Ole Miss football team as the ‘Mudcats,’ the student newspaper decided it was time for another contest and a new name.”

On May 2, 1936, The MISSISSIPPIAN staff started a contest to rename the Ole Miss athletic squads. “The Mississippi Flood doesn’t fit” was a headline on the front page of the campus weekly paper. The reporter states, “Some particular name to catch the public eye and fancy is essential. Ole Miss had made rapid stride during the past season on the gridiron. Further improvement will be shown during 1936. To further publicize the team, it is necessary that a proper nickname be applied to the school’s athletic squads.”

The contest failed to provide a new nickname for the team. Later, at the instigation of Coach Ed Walker; Judge William Hemmingway, chairman of the athletic association; D. L. Fair, president of the alumni association; J.K. Hamm, alumni secretary and athletic business manager; Tex Nelson, captain of the 1935 football team; Lyle Bates, president of the ASB for the 1935-36 session; Maj. Calvin Weeks; Lake Robinson, Martin Miller, and L.A. Smith Sr. met to consider a new nickname. The 600 suggestions and ballots were reduced to 40 and the list given to the committee. Of these, all but five were discarded and then sent to 42 prominent sports writers throughout the South.

The sports writers were to name their first, second and third choices. Twenty-one of the sports writers responded and their votes were as follows: 18 votes for the Rebels, two to the Raiders, and one to Ole Miss. The other two nicknames were the Stonewalls and the Confederates. The Alumni Association members called for a vote of the committee. They then approved the name for the Ole Miss athletic squads.

It would be the Ole Miss Rebels.

The artist of the drawing of Colonel Rebel is unknown; however, it’s been suggested it was drawn by Billy Hix, who was art editor of the annual that year.

Later, Carl Coers, the owner of a clothing and bookstore in the Student Union, wrote to the company that supplied his decals and pennants. He explained the new nickname and the first Colonel Rebel. They sent him several drawings, one of which was a little Southern colonel who leans on his walking cane while whistling Dixie.

A number of years later, John Chase the cartoonist for the New Orleans ITEM, sent a drawing to Jeff Hamm, the business manager of the athletic department. He said the caricatures made the colonel seem he was still suffering from Appomatox. He thought his drawing gave the Colonel “more vigor and fire in his eyes.”

In 1946, the male Ole Miss students started wearing large black hats and string ties to the games to model themselves after Colonel Rebel’s wardrobe. Dr. Sansing writes in his history of Ole Miss, “Blind Jim (who I wrote about a few weeks ago) may have been the model for Colonel Rebel who first appeared on the cover of the yearbook in 1937.”

The late Frank Everett, of Vicksburg and a longtime friend and alumni of the university, was Sansing’s source for this fact. Blind Jim was known for his large-brimmed black hats and at times a string tie. Only the artist of Colonel Rebel knew for sure if he was the model. In an article in the May 2, 1936, issue of the MISSISSIPPIAN, a staff reporter states, “Blind Jim is about to become famous. A recent questionnaire sent to the publicity department asks information about the official Ole Miss mascot. Without doubt, Jim is the one.”

Jack mayfield is a historian and Oxford resident. Contact him at jlmayfield@dixie-net.com.