Oxford Police Officers arrested an Auburn man for allegedly stealing from a car from a convenience store.

According to reports, on Thursday, OPD investigators charged Orlando Ezell, 23, of Auburn, Alabama, with vehicle burglary. They claim after taking a report of vehicle burglary that occurred at the Brittany Store, they used video surveillance to identify Ezell. After stopping him, investigators interviewed Ezell them found the stolen iPhone in his vehicle that was returned to the victim.

Ezell was taking to the Lafayette County Detention Center where he was booked on a $2,500 bond. 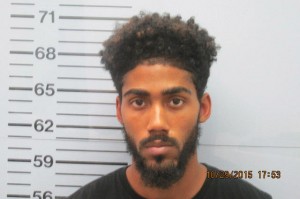 1 possession of marijuana in a motor vehicle

1 DUI and no driver’s licen

1 citation for possession of fake ID and speeding

1 citation for possession of drug paraphernalia

1 public drunk and possession of paraphernalia

1 DUI other substance, possession of drug paraphernalia, fake ID and driving the wrong way on a one-way street.

1 Possession of Beer under 21

1 public drunkenness and possession of beer by someone under 21

At 7:39 a.m. Friday called to Townhouse Suites by Marriot when steam from a shower activated a smoke detector

At 5:06 p.m. Friday called to the Phi Kappa Psi house on campus for a smoke detector malfunction.

At 7:40 p.m. Friday called to The Connection apartments after resident left food on a stove and found the apartment filled with smoke.

At 9:32 a.m. Saturday called to 308 Park Drive after steam from the steam room activated a smoke detector

At 8:32 p.m. Saturday called to the ATO house on campus after a smoke machine activated a detector.

At 12:39 a.m. Sunday called to The Hub after someone pulled a fire alarm as a prank.

At 1:43 and 1:44 a.m. Sunday called to Campus Creek apartments after burned food set off alarms.

At 4:20 p.m. Sunday called to Stewart Hall on campus after spraying bug spray set off an alarm.

At 6:51 p.m. Sunday called to the ATO house on campus after another smoke detector malfunctioned

At 5:25 a.m. This morning called to Baptist Memorial-North Mississippi but canceled in route