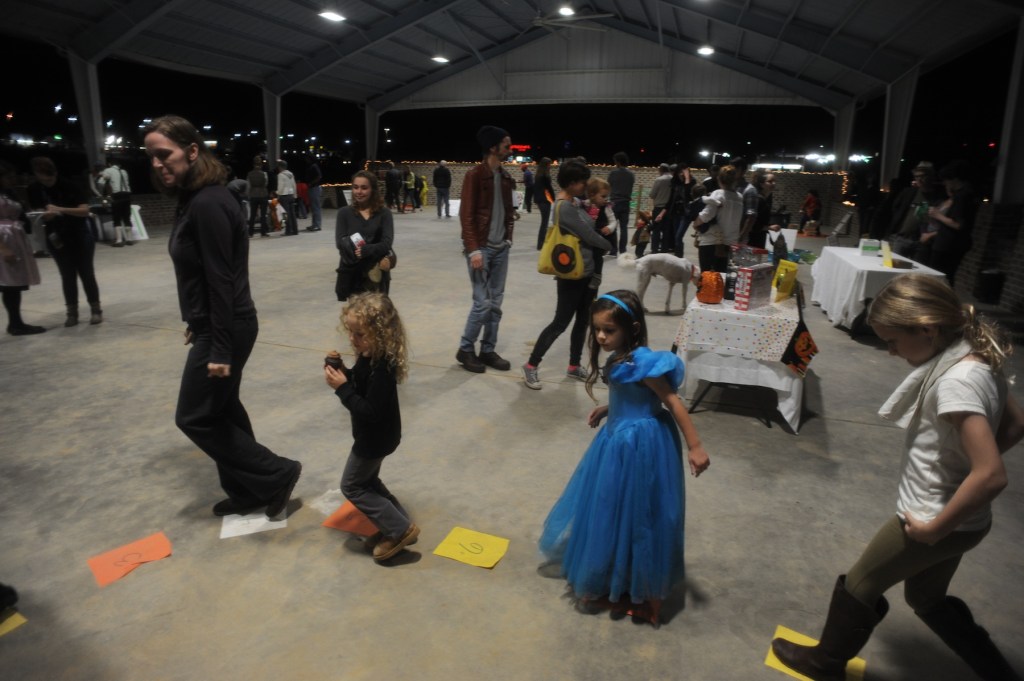 Participants in a cupcake walk step on numbered spots during Magnolia Montessori School event at the Pavilion in Oxford, Miss. on Friday, October 30, 2015. The vent was the first in the new Pavilion.

The first event was held at Oxford’s newest outdoor pavilion that is located where the former National Guard armory used to stand. Magnolia Montessori School was the first organization to rent the pavilion that is now under the Yoknapatawpha Arts Council, holding a Historic Halloween Carnival Friday evening under the brightly lit structure.

Magnolia Executive Director Stacey Sandford couldn’t have been happier with the event, or the new pavilion. “It’s amazing,” she said of the pavilion.

“When there was the threat of rain, I wanted a place that was protected and this certainly is. The parking is great and there is more than enough lighting. And the bathrooms are awesome. That’s greatly appreciated.”

The school usually held is historic Halloween program at school, where the students dressed as historical characters.

“There were some parents who couldn’t come to the program because of work,” she said during the event. “So this year we decided to make it an open event where everyone was invited.”

There was no candy at the event, just games, activities and a few cupcakes.

“Not one kid has asked for candy because they’re having such fun with everything else,” Sandford said while checking a student’s answers for a scavenger hunt.

The story of the new pavilion likens the story of the phoenix rising from the ashes. When the Oxford Board of Aldermen approved demolishing the old armory, there weren’t any real plans for the location. They knew the building needed to come down and that the city wanted something special to go in its place.

They just weren’t sure yet. During the demolition, Public Works Director Bart Robinson was driving by and there stood what looked like a pavilion. It was the roof and some support columns. It wasn’t pretty, but Robinson saw the potential and contacted the aldermen who later approved spending $50,000 to turn the remaining shell of the armory into a pavilion.

After it was complete, the board contracted with YAC to manage the pavilion. The pavilion is available to rent for community events, weddings, family reunions, church events and more. Events must be scheduled through YAC, according to executive director Wayne Andrews.

YAC has applied for a grant the Levitt Foundation which if awarded, would provide for a full series of free concerts for the community. “We are working with the Oxford Park Commission, Oxford Film Festival and Yocona International Folk Festival to offer programs,” Andrews said. The pavilion can be rented Monday through Saturday from 9 a.m. to 10 p.m. and Sundays until 9 p.m.