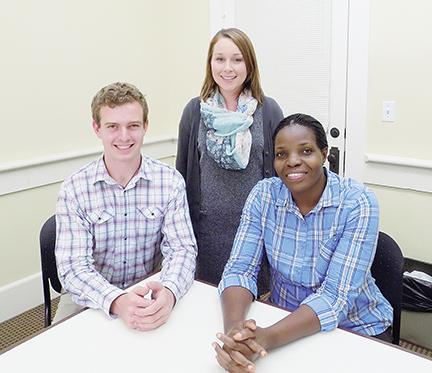 Global health care needs for women were front and center at the University of Mississippi last week with the visit of a Ugandan doctor.

Dr. Rebecca Nantanda spoke to several student groups on campus Oct. 28 as part of her tour of the United States about educating people on the need for support for global health care initiatives.

“As a mother, a child is a child and if I lose my child, that pain will never go away,” Nantanda said. She speaks for herself personally as well as professionally as a pediatrician for the children and mothers in Uganda.

Seventeen mothers die every day and four newborns die every hour. While progress has been made in recent years due to reformed global health care, those numbers are still shocking, Nantanda said. The majority of the infant and mother deaths are caused by treatable diseases and lack of education on prevention.

She is working, along with other groups, to reduce these statistics drastically by the year 2035.

John Chappell, advocacy chair of Rebel Global Connections, and his group are partnering with RESULTS and Nantanda on this issue to support human development worldwide.

REULSTS is a nonprofit based in Washington, D.C., that focuses on reducing poverty worldwide. The organization works to raise awareness and support government.

Global Grassroots Expansion Manager Amanda Beals has accompanied Nantanda across multiple states, cities and campuses to spread the raise awareness on the necessity of global aid.

“We have a historic opportunity to put an end to the preventable death in mothers and children by 2035,” Beals said.

Beals said sometimes people do not think this is a task that is doable, but the United States has been a proponent in lowering these deadly statistics over the years. Progress has been made, and Beals, along with RESULTS, are supporting current legislation in the House and Senate called the “Reach Every Mother and Child Act of 2015.” The Act requires a centralized and coherent strategy to maximize our investments.

The legislation would streamline the process of providing health and ensure better program prioritizing.

“The first thing this legislation does is calls for better coordination,” Beals said.

Nantanda is the president of Uganda Pediatrician Association. As a mother and an aunt, she has been a practicing pediatrician and a leading expert on child health in Uganda.

Nantanda currently with partners such as UNICEF, Save the Children, and the WHO, as they focus on a range of children’s disease prevention, health promotion, and clinical care issues in Uganda.

Some of the programs for better health she helps support include a multifaceted list of areas that support health care in a network. From child care and prenatal education programs to cellular phone service and transportation service that allows patients to find a doctor and reach them in time to be treated, Nantanda’s work reaches all levels of people in Uganda.

Nantanda has worked at all levels of health care in her home country through war and peace. She said she is passionate about child health issues as both a physician who’s seen the power of child health programs in Uganda, and as a mother of young children.

“The voice of the people who use these services are very important for us,” Nantanda said. “They are able to tell the politicians ‘we need more money being allocated to women and child health because we are dying.’”