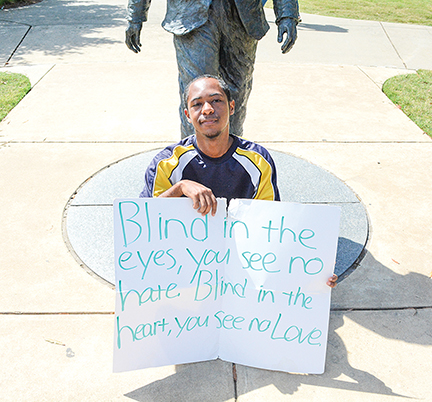 Submitted photo Correl Hoyle, a senior psychology major, sits in front of the James Meredith statue from 11 a.m. to noon to create awareness.

It’s only been a few weeks since a former Ole Miss student was sentenced for his role in placing a noose on the neck of the James Meredith statue at the University of Mississippi.

Since the controversial crime, another student sits at the foot of the same statue daily to create awareness about the incident.

Correl Hoyle, a senior psychology major, sits in front of the statue every day from 11 a.m. to noon.

The statue honors James Meredith, who was the first African-American to integrate the University of Mississippi in 1962.

The statue was created to symbolize Meredith’s bravery and courage, but on Feb. 16, 2014, two young white men hung a noose around the neck of the statue and wrapped it with a Georgia Confederate flag. A third was charged as an accessory to the crime.

“The university was quick to take the noose and flag off the statue, but they were not quick to discuss anything about it,” Hoyle said.

Graeme Harris, one of the young men convicted in the statue incident, pleaded guilty to using threatening force to intimidate African Americans. He was sentenced to six months in jail and 100 hours of community service.

“As a young man myself, I could not see being placed in a prison for six months, let alone a week,” Hoyle said. “I do not, and cannot because of my kind soul, say the punishment was enough, but I do feel that the punishment is necessary to prevent future acts of discrimination.”

Hoyle said there are still racial problems on campus. The tension that was there in February 2014 still exists. One of the problems he has noticed on campus is self-segregation. He believes a lot of people are afraid of opening up to others ideas or lifestyles.

“We smile at our self-cameras on our phones, yet we shy away from eye contact on the sidewalk from a stranger,” he said.

Correl said he did not encounter race problems in high school as one of five black students in his graduating class of 60.

“I had no problem with race until I came here,” he said.

Correl said a young, white girl, who he had never seen before, walked up one day and gave him a note that read:

“A poem to a stranger. I see you waiting in spaces between class, and I’m wondering how it is you last. I know that you gravel, and that they fear the emptiness of distance and the compassion that is here. Through it all, you sit beside him. Shadows cross a blurred face. What always matters is the patience to put a heart back together, to see in others a stunning grace. Love is unending.”

Although Correl has never seen her again, he carries the note in his wallet with him daily. He had thought about quitting the day he received it.

“I have thought about calling it quits,” he said. “This now isn’t necessarily a racial thing, but more of a humanitarian thing, although racism does fall into that category. Some people are glad that I’m out here, and that really drives me.”