Check in for election night results 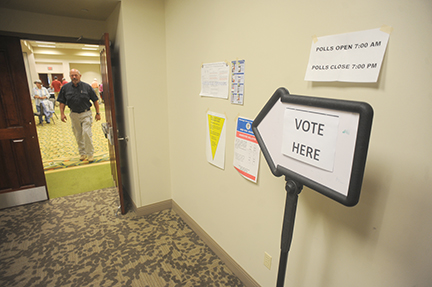 Bruce Newman The polls for Tuesday’s general election will open at 7 a.m. and close at 7 p.m.

Final winners will be posted here on our website as they come in, and results that come in through the night will be posted on the Oxford Eagle’s Facebook page.

Head over to https://www.facebook.com/oxfordeagle/ and give the page a like to stay up to date on results in the state and local races.

With all 18 precincts reporting here are the following results, not including the 680 absentee votes that are currently being counted in Lafayette County, here are the results as of 10:30 p.m.

So far, the Associated Press has declared the following:

He turned away a challenge on Tuesday from Republican Mike Hurst, a former federal prosecutor.

The 53-year-old Hood is one of the few Democrats still holding statewide elected office in the South.

He is engaged in a legal fight with Google, questioning whether the Internet search engine improperly helps people find pirated music and drugs without a prescription. The California-based company says Hood is infringing on its free-speech rights.

Hurst says Hood has failed to challenge President Barack Obama on immigration and has fallen short in prosecuting public corruption.

The 58-year-old Britton touted his financial credentials and experience, saying he would work to hold down how much Mississippi Power Co. customers will have to pay for the $6.4 billion power plant the company is building in Kemper County. However, Britton doesn’t take as oppositional a stance against the company as Blanton, who sued multiple times, sparking the Supreme Court to order refunds.

Britton replaces Steve Renfroe of Moss Point, who doesn’t publicly identify with a party. Renfroe chose not to seek election after Gov. Phil Bryant appointed him to serve a partial term.

King, who served 19 years in the Legislature, is a former historic restoration consultant. King favors more funding for the agency and said he wants to work with the business community and lawmakers to find it.

Toney sought election saying he wanted to increase construction quality of roads and bridges to make them last longer, saying better work would remove the need for more money. He ran unsuccessfully for the same post in 2007.

Democrat Brandon Presley of Nettleton has won election to a third term on the Mississippi Public Service Commission.

The 38-year-old Presley has maintained a populist stance on the three-member utility regulatory body. He’s been a consistent opponent of the $6.4 billion power plant that Mississippi Power Co. is building in Kemper County. Presley has also sought to stretch the commission’s regulatory authority to electrical cooperatives.

Presley will be the only returning incumbent on the commission. Republican Lynn Posey of Union Church didn’t seek re-election. Steve Renfroe of Moss Point, who doesn’t publicly identify with a party, did not choose to seek election after being appointed to fill out a partial term by Gov. Phil Bryant.

Tagert, formerly administrator of the Tennessee-Tombigbee Waterway Development Authority, lost a special election bid for Congress earlier this year. He says the Transportation Department needs more money to maintain the roads and bridges it has built. He says he wants to develop a better plan for the future.

Woods, who ran unsuccessfully for Montgomery County Coroner as a Democrat in 2011, said he wanted the state to do more to beautify its highways. He questioned whether the state needed more money when lawmakers were borrowing money to build an aquarium in Gulfport.

The other candidates were Libertarian Ron Williams and the Reform Party’s Rosa B. Williams.

Reeves says education is receiving more money than ever and the state can’t afford to put more people on Medicaid. He also says that as presiding officer of the state Senate, he has helped Mississippi create a business-friendly atmosphere.

Pickering is a former state senator from Jones County.

Pritchett owns a civil-engineering firm and was making her first run for public office.

Republican Cindy Hyde-Smith has been elected to a second term as Mississippi agriculture commissioner.

Hyde-Smith is a former state senator from Brookhaven and has worked in the cattle business.

Democrat Robert Gray is a long-haul truck driver who spent just over $3,000 to run for Mississippi’s top job.

The Reform Party’s Shawn O’Hara, who has unsuccessfully sought several statewide offices the past 20 years, spent about $300 to challenge Bryant.

The 60-year-old governor spent about $2.7 million. He campaigned by saying he has focused on creating jobs and making specific changes to education policy, such as creating charter schools and emphasizing reading skills in early grades.

Republican Delbert Hosemann has won a third term as Mississippi secretary of state.

As Mississippi’s top elections official, Hosemann has worked in recent years to implement a law that requires voters to show government-issued photo identification at the polls.

Fitch on Tuesday defeated the Reform Party’s Viola V. McFarland. No Democrat was in the race.

Fitch survived a tough challenge in the Republican primary in August from David McRae, an attorney who criticized her management of a state-sponsored college savings plan. Fitch says she has been a good steward of public finances.

Polls are closed and votes are being counted in Mississippi’s general election.

Voters on Tuesday were deciding whether to keep Republican Gov. Phil Bryant for a second term and Democratic Attorney General Jim Hood for a fourth.

They were also filling six other statewide offices, six regional offices and all 174 legislative seats.

Two school funding proposals were also on the ballot.

Secretary of State Delbert Hosemann’s office says more than 2,000 voters in the Mississippi Delta county are designated to vote in the wrong Senate district. Pamela Weaver, a spokeswoman for Hosemann, said Tuesday that the Bolivar County Election Commission failed to realign voters to match new Senate lines drawn by the Legislature in 2012.

Republican Gov. Phil Bryant and his Democratic challenger, Robert Gray, have voted in the Mississippi election.

Bryant is seeking a second term. He voted Tuesday morning at the Eudora Welty Library in downtown Jackson, near the Governor’s Mansion. Campaign spokesman Shad White says Bryant confirmed that he voted a straight Republican ticket and against Initiative 42, a citizen-sponsored school funding proposal.

Gray tells The Associated Press that he voted Tuesday morning at a precinct in Terry and that he voted a straight Democratic ticket and in favor of Initiative 42.

Gray is a long-haul truck driver who surprised even himself by winning the Democratic nomination in August. He said he didn’t vote for himself in the primary because he was busy running errands that day.

Officials in six of the 82 counties— Hancock, Lafayette, Lauderdale, Monroe, Rankin and Washington — say they had received no complaints of long lines by midmorning.