ON THE WAY BACK: Conner set to return for Rebels against Arkansas 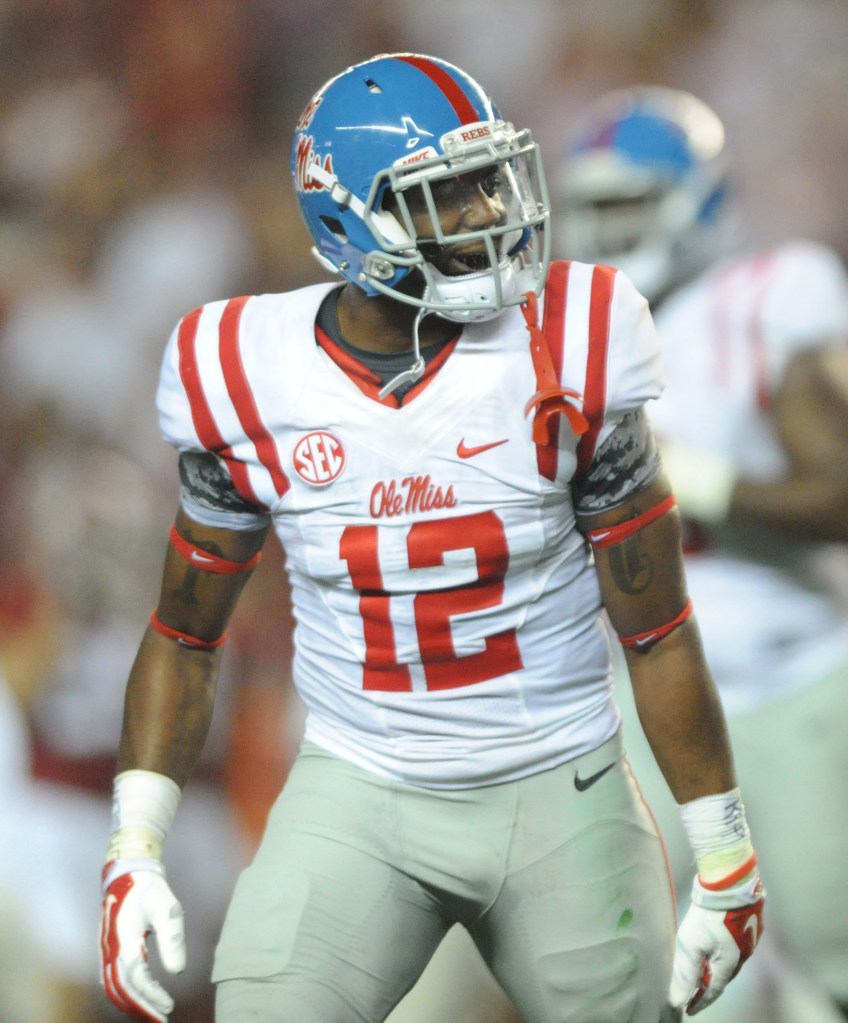 Ole Miss defensive back Trae Elston (7) celebrates with Ole Miss Rebels defensive back Tony Conner (12) following his interception in the first half against Alabama at Bryant-Denny Stadium in Tuscaloosa, Ala. on Saturday, September 19, 2015.

The last missing piece on Ole Miss’ defense will return this weekend.

Safety Tony Conner is “going to give it a go” against Arkansas on Saturday, Ole Miss coach Hugh Freeze said Monday. Conner hasn’t played since tearing the meniscus in his right knee against Alabama on Sept. 19.

Conner ended up not making the trip to Auburn after practicing on a limited basis last week, but barring any setbacks, the junior doesn’t have much longer to wait to return to the field.

Conner’s absence caused a ripple effect in the Rebels’ secondary as No. 19 Ole Miss (7-2, 4-1 Southeastern Conference) tried to find an adequate replacement for the All-SEC performer. A.J. Moore initially filled in at Huskie, or Conner’s nickel corner position, but that experiment lasted just two weeks before coaches decided before the New Mexico State game to move Mike Hilton there with C.J. Hampton taking over at free safety.

The reshuffled secondary gave up more than 380 yards through the air to Memphis in a two-touchdown loss but has settled in since, helping the Rebels limit Texas A&M and Auburn to 22 combined points and a combined 8 of 35 on third down.

Though it’s unknown exactly how many snaps Conner will get against the Razorbacks (4-4, 2-2), his return will put the collective defense back in its normal place for the first time since that September night in Tuscaloosa. Linebacker C.J. Johnson has been back from his meniscus injury for two weeks while defensive tackle Robert Nkemdiche returned from his concussion last week against Auburn.

“Getting Tony back is going to be a plus for us,” Hilton said. “We know he’s hungry to play. We all want him back. Everybody knows how important he is to the defense. He just adds another player for us to get back to our regular scheme and go out there and make plays like we’ve been doing.”

Conner, at 6-foot and 215 pounds, will give the Rebels more beef at the point of attack against Arkansas’ bruising run game than the 5-9, 184-pound Hilton, who said Monday he hadn’t been told if he would be staying at Huskie this week or go back to free safety.

It’s a matter of pain tolerance at this point for Conner, whose injury was far more severe than the one Johnson suffered against Florida and raised questions as the weeks went on as to whether Conner would return this season.

Freeze said last week that Conner will have to have another surgery on his knee after the season, but the Rebels plan to get as much as they can out of their star safety for the time being. Ole Miss has an off week coming after Arkansas before finishing the regular season against LSU and Mississippi State.

“Our goal is to try to get him through this season playing in some of these critical last games,” Freeze said. “We’ve got this week and then we’ve got an open week where if there is additional swelling, we hope we can get it under control so that he’ll be ready to play the last two.”