Judd works for his opportunity 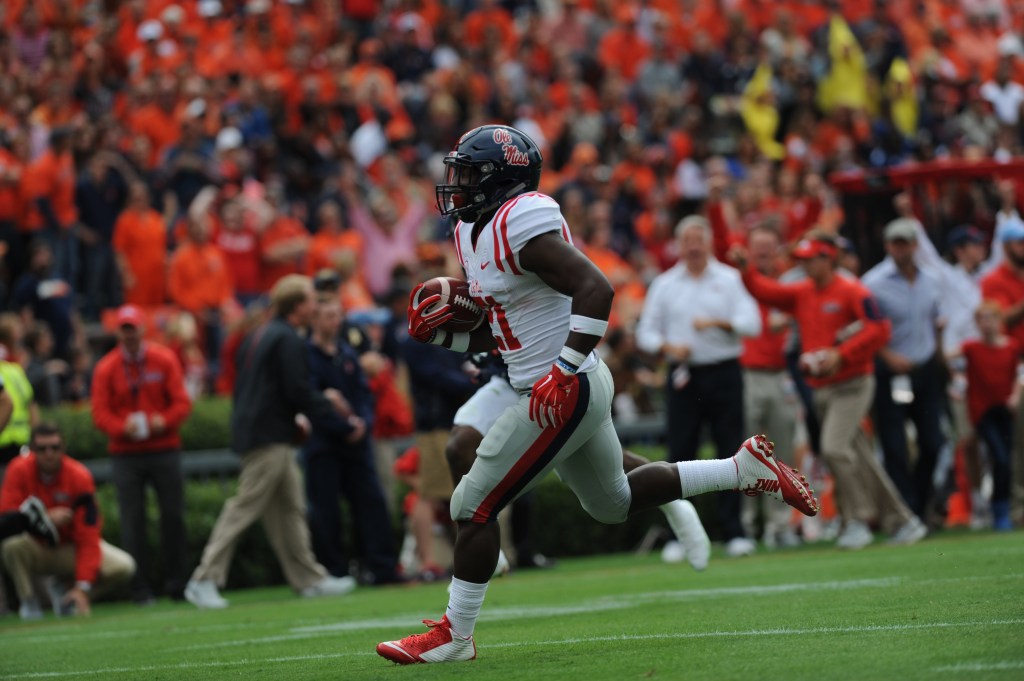 Ole Miss Rebels running back Akeem Judd (21) runs 25 yards for a touchdown against Auburn at Jordan-Hare Stadium in Auburn, Ala. on Saturday, October 31, 2015.

Akeem Judd is used to earning everything he gets.

The first member of his family to graduate from high school and attend college, Judd is in his second season at Ole Miss after a detour in the junior college ranks. The 5-foot-11, 222-pound running back was supposed to pack the punch for a running game that’s sorely lacked it in recent years last season before an injury halted his conditioning and eventually forced him to redshirt.

Judd was praised in the spring and in fall practice by coaches and teammates for his physicality, but the fourth-year junior got just 17 carries through the first five games. He got 12 carries in mop-up duty in Ole Miss’ rout of New Mexico State on Oct. 10 and just one against Memphis, a strange trend for a player who was ranked as the nation’s top junior college running back coming out in 2014 by multiple recruiting services.

“I think that comes with it for everybody whenever you’re not playing and you feel like you can play,” Judd said, referring to whether he began to question his abilities at the FBS level. “You start to question yourself like, ‘What’s going on?’ That did come in the back of my mind a couple times, but I knew I had the talent to play. I just needed the opportunity.”

Judd has gotten it the last two weeks as the Rebels have tried to breath some life into a running game that went nowhere against quality competition the first half of the season, and he’s started to show some of that talent.

Judd matched those season-high 12 carries against Texas A&M and ran for 68 of Ole Miss’ 230 yards, the most the Rebels have accumulated against an SEC defense in three years. Last week in the Rebels’ 27-19 win over Auburn, Judd got eight more carries and went for 54 yards.

His third carry covered 25 of those yards to draw Ole Miss even at 10 midway through the second quarter with Judd lining up directly behind Chad Kelly in the Pistol formation, taking the handoff to the right, cutting back to his left and juking Auburn safeties Johnathan Ford and Tray Matthews a few yards past the line of scrimmage to pave a clear path to the end zone.

Diagnosing plays for Judd is easier out of the Pistol because that’s a formation his previous offense at Georgia Military College featured heavily, but everything else took a little time. Learning the ins and outs of Ole Miss’ up-tempo offense in practice was one thing, but Judd admitted it all moved too fast once games rolled around.

“At first when you’re in a game, you kind of have to think, ‘Where do I line up? What’s my keys to read and everything?’” Judd said. “It just wasn’t processing real fast like it should.”

Self-reliant
But things weren’t nearly as bad as they seemed. Not for a guy who considers himself lucky to even be suiting up every Saturday.

Growing up in what Judd called “poverty and just a real, real bad neighborhood” in Durham, North Carolina, Judd fended for himself. His mother wasn’t around much, and the idea of getting beyond high school was an afterthought for he and his three siblings.

But Judd did enough on the football field at Southern High to land at Georgia Military, where he rushed for 1,021 yards in two seasons before spurning Tennessee among others to sign with Ole Miss in February 2014.

“Not too many people make it out,” Judd said of his North Carolina home.

Equipped with a clean bill of health and a clearer mind — he said he “started feeling comfortable” with his mental assignments against New Mexico State — Judd has finally been furnished with an opportunity for a team that’s in the thick of the championship race in college football’s premier conference.

“He’s finishing runs. He’s taking care of the ball when he runs,” head coach Hugh Freeze said. “He’s been a very nice bonus for us.”

For Judd, that’s more than enough.

“I learned to cope with (my early struggles) because don’t nobody owe me nothing,” Judd said. “I’m here on a scholarship, I’m blessed, and I made it out of a tough situation. Whatever I can get, I’m thankful for.”