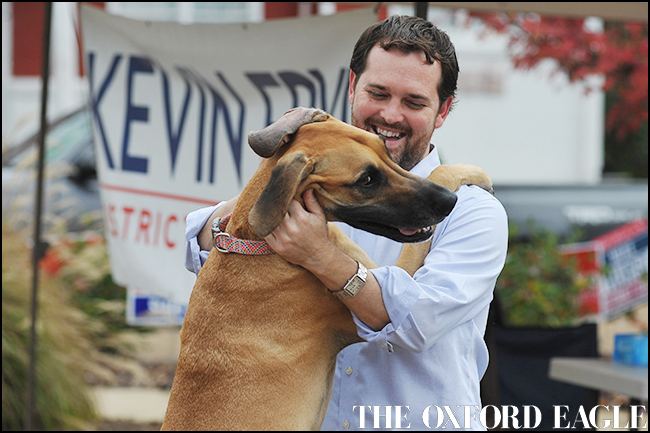 Supervisor District 1 candidate Kevin Frye plays with a friend's dog outside the polls at the Oxford Community Center in Oxford, Miss. on Tuesday, November 3, 2015. Frye won the seat.

“You don’t think your vote matters — it does,” he said after the final results were announced at the Lafayette County Courthouse. “I’m just excited God has given me this opportunity to serve him and the people of Lafayette County.”

Voter turnout was at just over 37 percent, much improved than earlier elections this year where about 20 percent of registered voters went to the polls for the primary and runoff election.

Rikard said he was going to take a few days to rest and make phone calls to thank his supporters then hit the ground running to prepare for when he takes his seat on the Lafayette County Board of Supervisors in January.

“I’ve already been studying and I will learn everything I can so when I do step in I will make that learning curve as small as possible,” Rikard said.

Rikard will sit in the same chair current Supervisor Robert Blackmon has held since 1996.

Gordon said he enjoyed campaigning and meeting new people, including his opponents.

Gordon said he was honored to have the support of almost half the voters but isn’t sure he will toss his hat in again down the road.

“That’s something I’ll have to pray about,” he said, chuckling.

Frye, who also waited at the courthouse for the results, said he is looking forward to helping guide Lafayette County into the future with responsible growth planning.

“I want to thank all of my supporters, my friends and neighbors who have supported my campaign since January,” Frye said. “I want to show my appreciation to the other candidates in the hard work we all have put in, including our families. It’s been a long year. I look forward to getting to work for all of the residents of District 1.”

In District 5, incumbent Mike Roberts had a solid win over his opponent, Republican Johnny Mike Fortner with 62.65 percent of the votes, or 770 votes. Fortner received 459 votes, or 37.35 percent.

“I appreciate everyone turning out today and trusting in me to give them another four years of service,” Roberts said. “We haven’t done it all right, I haven’t done it all right, but I think we’ve done some great things and hope we can work over the next four years to improve the things we need to improve and continue to work hard for this county.”