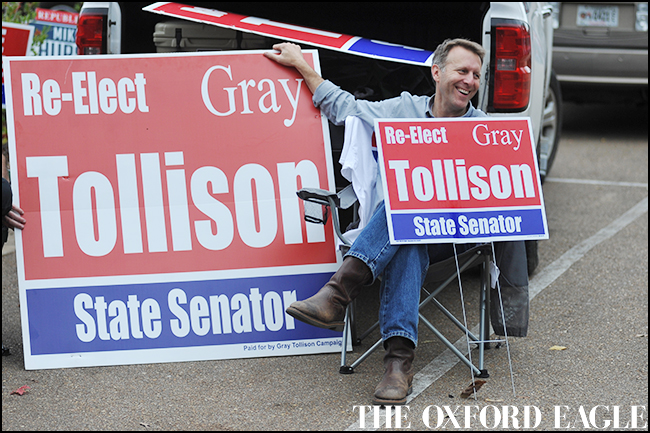 State senator Gray Tollison talks with a person in a passing car outside the Oxford Community Center in Oxford, Miss. on Tuesday, November 3, 2015. Tollison was reelected.

A special election will need to be held in the early months of 2016 to replace Oxford Ward 1 Alderman Jay Hughes who will be sitting in a new chair come Jan. 1 in Jackson.

Hughes celebrated at the Lafayette County Courthouse after the final results were read by giving his wife and daughter a kiss.

“Most importantly, I thank my wife and daughter for their love and inspiration and the reason I get up every day and do everything I do,” Hughes said. “Second, I thank my parents for putting a fire in my belly and compassion in my heart, and finally, I thank everyone who voted, for participating in our great democracy and all of those in District 12 for showing that the education of our children is our future and above party politics.”

Hughes’ campaign was based almost entirely on the issue of education and his support of Initiative 42, which while narrowly winning in Lafayette County, lost statewide.

“I’d like to congratulate Jay,” Mayo said after the final results were announced at the courthouse. “It’s been an absolute honor to serve the people of District 12 for the last four years. This is an area that’s very special to me and I’ve been proud to serve it. I’m proud of the things we’ve done. I wish Jay the very best. I look forward to spending a lot of time with my family.”

Mayo was also a serving alderman in Oxford for Ward 6 when he was elected to the House of Representatives four years ago. A special election was held, which was won by current sitting aldermen Jason Bailey.

Mississippi District 9 Sen. Gray Tollison retained the position he has served in for the last 19 years.

His opponent, Cristen Hemmins, took about 40 percent of the votes overall and said she was proud of her showing as a first-time candidate.

“I’m really proud and pleased with how our campaign went,” she said. “I brought a lot of people into the political process who normally don’t feel represented. My campaign was issue-based and those issues aren’t going away. I’ll be back.”

Like Hughes, Hemmins’ campaign focused heavily on support of Initiative 42.

Tollison said he was honored to have District 9 choose him to serve another four years.

“I am very thankful for the support of the voters in Lafayette and Panola counties,” he said. “I greatly appreciate their confidence in me to represent them in the state Senate. I will continue to work hard for our communities and our state.”