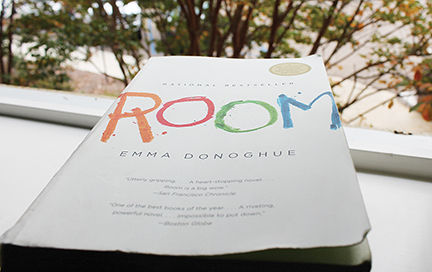 Emma Donoghue’s novel “Room” explores the world through the view of a 5-year-old boy.

Emma Donoghue’s novel “Room” is a story of unwavering love in a seemingly hopeless situation and an insightful examination of the world we live in.

The most resonating thing about this book is Donoghue’s choice to have 5-year-old Jack narrate the entirety of the novel. This bold decision provided a tale that is rarely matched in its ability to so immediately provide readers with sense of wonder, horror and beauty in all things ordinary.

Donoghue’s mastery of word choice and perspective allows readers to understand the physical as well emotional and cognitive limitations that Jack is working through when faced with realities that do not always match up.

Without giving too much away, the novel can be primarily divided into two parts: Jack’s life in Room and life in Outside.

Room is all that Jack has ever known. He was born there on Rug, who sits by Bed. The 11-by-11 space makes up Jack’s entire universe, just he and his Ma.

The book begins on the day of Jack’s fifth birthday. He and his Ma go through their daily routine including watching one television program, reading, Phys Ed and a few other things. Unbeknownst to Jack, his Ma is doing everything she can to make sure Jack is literate, physically fit and mentally developed.

Jack’s understanding of numbers and language is years beyond his age. He understands quite a bit but is also confused about several things he cannot quite reason out. He can read “Alice in Wonderland,” but he is not sure whether the sea exists all the time, sometimes or if it is just TV. Jack asks his Ma but he is still never sure what to believe.

This disconnect really becomes apparent when Jack is in Outside. Why are there vultures taking his picture? Why are there so many doctors? Is there more than one Jack in Outside? These thoughts tend to make his head hurt.

The tremendous amount of love between Jack and his mother is evident in every page of this novel. Jack’s world is steadily growing bigger. Everything in Outside is raw and loud and terrifying. The only thing that makes it a little less scary is his Ma.