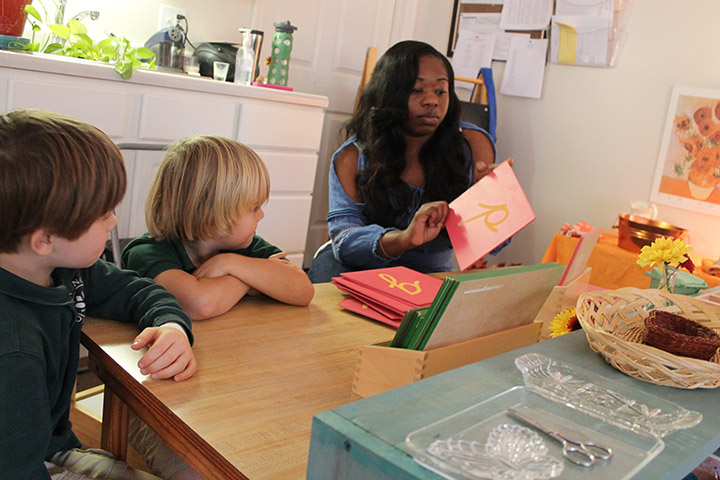 Students work in the classroom at Magnolia Montessori.

Magnolia Montessori is a not your typical elementary school. There is no testing. Personal development is emphasized over aiming for federally controlled objectives. Students help prepare their own meals, which often includes cutting their own fruit. They eat from real plates using real silverware and have to wash the dishes when finished. Magnolia Montessori is a Montessori school and operates on a different set of standards than public schools.

According to the American Montessori Society, there are currently over 4,000 Montessori schools operating in the United States. Of that number, more than 400 public schools offer optional Montessori programs.

Karyn Jankowski is the founder of Magnolia Montessori. Jankowski graduated from the University of Mississippi with a bachelor’s in business administration in 1999. She then went on to obtain a master’s in early childhood education from Loyola University in Baltimore, as well as to two additional diplomas from the Association of Montessori International. She then worked in a Montessori school in Memphis for about five years.

Upon moving to Oxford with her husband and two children, she learned that the only Montessori school in Oxford, Twin Oaks Montessori, was closing in May of 2009. Not wanting her youngest child to miss out the chance to be educated in a Montessori environment, Jankowski decided to start her own school. In fall of 2009, she opened Plein Air Montessori School in a one-room schoolhouse in Taylor.

“I stood out at the farmers market a few Saturdays,” said Jankowski, referring to how she recruited students for the first year of the school. “I approached parents with young children who would be of age for the school and explained who I was and asked if they’d be interest. I got a great response.”

Plein Air originally operated with six students. Two years later, another building had to be added to accommodate the increased enrollment. Three years after that, the school moved to its current location on Old College Hill Road where it immediately doubled in number of students.

In light of such growth, Stacey Sanford was brought in as executive director of the school. A unique thing about Montessori schools, Sanford explained, is that there are no tests.

A major part of the Montessori Method focuses on observation. There is a view-window in every classroom in Magnolia Montessori. Teachers, or “guides” as they are referred to at Magnolia, closely monitor student progress and adjust the curriculum or method of instruction as needed. For example, if a child is only focusing on doing math exercises, is it because he is extremely comfortable with numbers or do other subject areas like reading or writing intimidate him? Using the Montessori Method, a guide will be able to help the child identify the issue, if one exists at all, and proceed accordingly.

“If you go up to any of our students and ask them what they are good at, they can tell you without ever having to have a test score in front of them,” said Sanford. “The same applies for subjects they’re struggling with. They don’t need a percentage in front of them to tell you how they’re doing. It all ties back into the importance of self-regulation.”

Magnolia Montessori is constantly growing and they are always looking for more students.