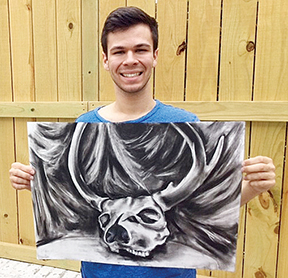 Jack Thrasher with one of his works.

Many young artists focus on mastering the perfect portrait, but for Jake Thrasher, the craft goes beyond painting pretty pictures.

Thrasher, 19, a sophomore biochemistry and visual arts double-major at the University of Mississippi, creates art to make statements about social and political issues.

“Art is a powerful tool in society,” Thrasher said. “You can invoke emotions really quickly. I think it’s really important in society to use art as a way to grab people’s attentions about issues.”

Thrasher grew up interested in art, but did not consider himself to be an artist until his junior year of high school.

After creating his first serious piece “Dog on Two Legs,” he realized he could use art to make statements about society while expressing his own inner creativity.

“Dog on Two Legs” is a mixed media painting of a girl with a dog’s head holding a balloon shaped like a missile.

Thrasher created this work after reading a newspaper article about drone strikes in the Middle East. In the story, two soldiers have a conversation wondering if the drone they launched killed a child. The captain claimed they only killed a dog. The soldier responds sarcastically saying their victim had been standing on two legs.

With “Dog on Two Legs,” Thrasher critiques the sense of dehumanization drone strikes have caused within military conflicts.

After displaying “Dog on Two Legs” at three different art shows and being featured twice in the Birmingham Museum of Art, Thrasher proved that he could challenge public opinion through his artwork.

“Jake likes to challenge what people think and why they think that, and his art is no different,” said Rachael McDuffey, a friend and supporter of Thrasher. “I think that he uses art to express his feelings and beliefs, but he also uses his art to challenge people to think in a different way about what they are seeing.”

To further set his work apart, Thrasher modernizes traditional styles to connect them to popular and personal connections.

“My style of art is a revival of surrealism and magical realism,” Thrasher said. “While those styles focused on the human psyche and dreams, exploring psychological and Freudian ideas, mine explores social and environmental issues, as well as other outward issues that are prevalent in today’s society, but they also explore personal themes and meaning to myself.”

Thrasher has created pieces about a variety of different subjects, ranging from Black Lives Matter to water conservation. He said nature is his biggest inspiration and the most repeated theme in his art.

“I will combine the human form with animals, plants, or other naturalistic forms to try to show the ties between human life and the life of our planet,” Thrasher said. “I think a lot of times people set the human race on this pedestal, and it removes us from being part of nature, which is deadly thinking in my opinion because it leads us to disregard nature. We don’t realize how big of an impact we have on the environment and that it eventually will come back and hurt us.”

To date, Thrasher’s work has been featured in many different venues in Alabama and Mississippi. In Oxford, he has had pieces exhibited at the Sally McDonnell Barksdale Honors College Fine Arts Showcase: “The Southern Wild” and within Populi Magazine. His art recently was published as the front and back cover for the fall 2015 edition of the The University of Mississippi Honors Report.

He has also commissioned pieces for the Oxford community.

Thrasher currently serves as a staff illustrator for The Daily Mississippian, illustrating political cartoons three times a week. He says he prefers fine arts but enjoys cartooning, finding it to be a new challenge for him as an artist.

“[Cartooning] challenges me to think in a different way, be quick on my feet with my art, and be more involved and up to date on issues,” Thrasher said.

“His use of everyday objects in unexpected ways and how he is unafraid to tackle social issues make him stand out,” McDuffey said.

Thompson, Grant will be guests on TMR