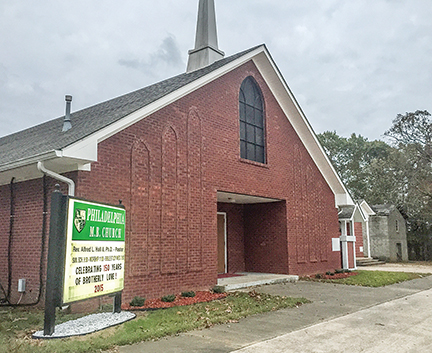 Philadelphia Missionary Baptist Church is gearing up to celebrate the congregation’s 150th anniversary.

Church members are ready for the Nov. 14-15 celebration, which goes beyond local, county and even American history, said current pastor Alfred Hall II.

“During the period of Reconstruction and the subsequent civil rights movement in our nation’s history, the black church was one of the few places in which African-Americans could freely congregate,” Hall said. “As a result, many of the African-American leaders that emerged during these periods were also leaders within the black church.”

More often than not, before and during the Civil War, black and white residents would share a church, but were forced to sit in the back or in another part of the church. The Philadelphia Baptist Church was the same during the Civil War. The whites held their own services inside the church while separating the blacks with a dividing wall where they could worship on their own.

With the end of the Civil War in April 1865, a meeting was held with the intention to create a Missionary Baptist Church for black residents of the community. Aben Sanders and Joseph Q. Pegues founded the church in November 1865, and the “Church of Brotherly Love” was constructed on land donated by Pegues for the congregation.

It was the vision of Sanders and Pegues to grow to become more than a church. It was their dream, and all others who followed them, to see the church become one with the community and not simply be another part of it.

It did not take long for the two men to realize that their dream could become a reality. The church experienced massive growth in the early years until the congregation grew so large that a new church, East St. Peter’s Missionary Baptist Church, was built to house the growing congregation.

The next major improvements to the church took place in 1989 under the leadership of Theopolis P. Vinson, the man most of the congregation still remembers fondly, Hall said. Vinson came to preach at the Philadelphia M.B. Church on the first Sunday in 1990, and from that day forth, church services were held every Sunday morning. His sermons were energetic and powerful, and he was a charismatic leader with youth on his side. Vinson looked to bring the church to new heights, and he did. Perhaps the most notable of his accomplishments was the construction of a new sanctuary for the congregation that is still used to this day.

While being the pastor of the Philadelphia M.B. Church, Vinson was also the assistant dean of the School of Education at the University of Mississippi. He passed away at the age of 43 in March 2003 and was unable to see the church continue to grow under his supervision, but he left a lasting mark on the church and the community. He believed that charity through the church and education was the right way to make a mark on society, and there is now a scholarship offered in his name at the University of Mississippi for young men and women who display those same values.

There seemed to be too large of a void to fill after Vinson’s untimely passing, but the congregation believed they had found a worthy successor in Hall.

“Pastor Vinson was a great mentor and dear friend of mine.” Hall said. “He was an eloquent statesmen for our church, the community and the University of Mississippi. My ministry began under his leadership at PMBC, and when his untimely passing occurred in 2003, his void was too great for one person to fill.  The blessing that emerged from this devastating loss was in the way that our church rallied around each other in the true spirit of brotherly love.”

“Brotherly love” is the motto the congregation uses to describe itself. It is mentioned often by the congregation as the unofficial name of the church and written in bold letters on the sign outside of their sanctuary.

Down a short drive on a dead-end road, the Church of Brotherly Love still stands with its steeple soaring high. Its red brick base stands strong as a concrete example of Sanders’ and Pegues’ visions of the church when it began 150 years ago. Remnants of the old church used by the congregation stand off to the side of the property as a reminder of the past and how far they’ve come.

“Even with all of our successes and accomplishments over the past 150 years, we are not a perfect church.” Hall said. “Our plans for the future drive us to continue growing to become the church that God has created us to be. We will continue striving in our service to the Lord to earn our name as the church of brotherly love. In this effort, we hope to one day become a transcending force for hope and positive change in our community as we work to empower the saved to live God-fearing lives and fulfill the mission of Christ.”

If the last century and a half are any indication of the future, Hall and his congregation will have no problem accomplishing what they set out to achieve.