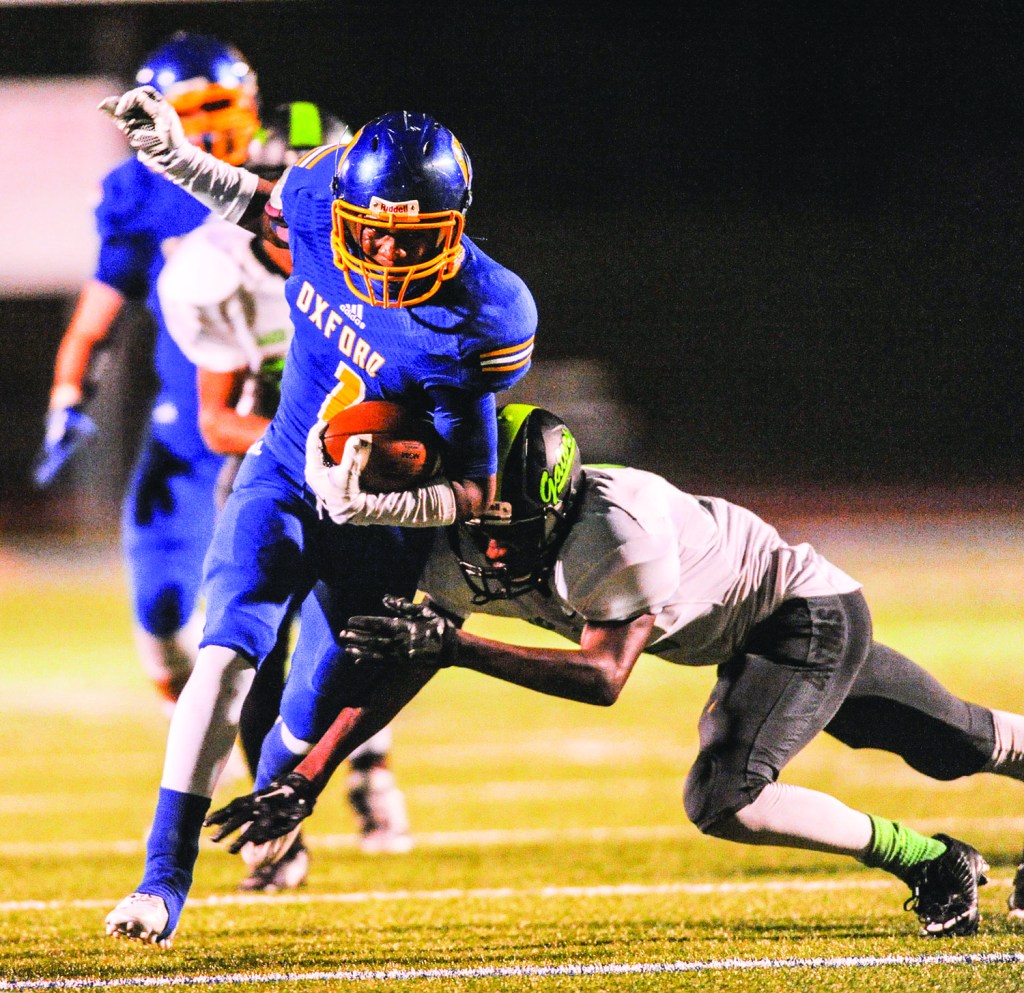 It was Senior Night. It was Johnny Hill’s final regular-season game at home.

Oxford was not going to lose, and the Chargers made sure of it.

After a back-and-forth opening quarter, the Chargers pulled ahead, defeating Lake Cormorant 56-26 at Bobby Holcomb Field on Thursday night.

The win gave Oxford (9-2) a perfect 7-0 record in Region 1-5A for the third consecutive year. After starting the year 2-2, Oxford has rattled off a seven-game winning streak capped by Thursday’s win.

“It’s hard to believe the regular season is over with,” Hill said. “Eleven games have gone by so fast. Now our second season is over with and we wanted to be No. 1, and we are. Now we start the third and final season of getting in the playoffs and trying to move on.”

It was a night of celebration as the 30-plus Charger seniors along with seniors from the band and cheerleading squad were honored during a pre-game ceremony.

The mood was festive, but Lake Cormorant (7-5, 4-3 Region 1-5A) and its quarterback, Will Guest, had intentions of putting a damper on the party and were succeeding early.

Oxford fumbled the opening kickoff with the Gators recovering. Two plays later, Guest threw a 35-yard strike to put Lake Cormorant up 6-0 after a missed extra point attempt just 15 seconds into the game.

The Chargers responded with a lengthy 12-play drive that took 3 minutes, 30 seconds off the clock, a long possession for an Oxford team that likes to score quickly. The drive was capped by a 1-yard touchdown run from senior Martin Guzman, giving Oxford a 7-6 lead with 8:15 left in the opening quarter.

The shootout continued with both teams scoring on each of their next two possessions, making it a 15-12 Oxford lead after a converted two-point play by the Chargers and another missed extra point by Lake Cormorant.

Hill then pulled out his specialty — an onside kick, which Oxford recovered — and the Chargers marched down the field in five plays to extend their lead to 22-15 after a 2-yard touchdown pass from Jack Abraham to tight end Zach Cousar.

It was not just Abraham who had a solid night but the offense as a whole. The Chargers did what they wanted when they wanted, scoring touchdowns on six of their seven first-half possessions.

The seventh drive ended with Liam Cooper’s 41-yard field goal attempt blocked by Lake Cormorant as time expired in the first half.

“They’re an amazing bunch,” Hill said of the offense. “D.K. (Metcalf) made some unbelievable catches. He’s a good one. The rest of them did, too. It’s a team thing with the line, the backs, the receivers, and you got a good triggerman. That’s something that’s hard to do with Jack. If you want to roll the dice and blitz him, it’s out of his hands and he goes to the right place and that’s what people don’t quite understand that don’t know football. If you give him time, he’ll burn you. If you don’t give him time, he’s going to find an open receiver.”

Metcalf put on a performance with fellow 2016 Ole Miss commit Shea Patterson in attendance cheering him on. He made two one-handed catches for touchdowns with one being a 48-yard reception that started with him leaping into the air, snagging the ball with one hand and breaking past two Gator defenders.

Consistency with the Chargers’ secondary has been an area of concern for Hill over the past several weeks and started out as one Thursday in the early going. Guest had touchdown passes of 35, 40, 26 and 15 yards, respectively, in the first half. The defense managed to shut the Gator offense down midway through the game, ending Lake Cormorant drives in two interceptions and three punts.

“We let them get behind us some and they’re good. They’ve got tall receivers,” Hill said. “We had some short corners on them, and they exploited that. It depends on if our kids learn. We work on this stuff, and sometimes we just have a brain fart and let guys get behind us. You’re putting them in a bind out there when they’re eight inches shorter than the receiver. You’re asking for trouble.”

Oxford hosts Vicksburg next Friday in the first round of the