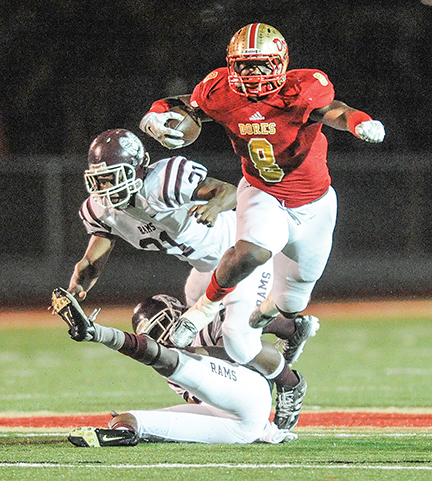 Lafayette has taken it easy the last couple of weeks, but the schedule is about to get considerably more difficult in a hurry.

The Commodores advanced in the MHSAA Class 4A playoffs with ease Friday, blowing past Gentry 48-7 at William L. Buford Stadium to extend their season another week. The win earned the Commodores a second-round date this week against Noxubee County, the defending 4A state champion.

The Commodores (10-2) scored all but six of their points before halftime and had a five-touchdown lead midway through the second quarter. It was the second straight week Lafayette’s lopsided advantage resulted in a running clock in the second half as the Commodores, who have won back-to-back games by a combined score of 98-15 since losing at Senatobia on Oct. 23, emptied their bench in the final two quarters.

“I think the last two weeks despite who our opponent’s been, we’ve come out ready to play football,” Lafayette coach Eric Robertson said. “You can see it in their eyes. We were locked in to what our job was and what we wanted to accomplish.”

Lafayette’s regulars had strong nights before giving way to the reserves.

Price had four rushing touchdowns and finished with 122 yards on just 10 carries, leaving him just 29 yards shy of 2,000 for the season. He had 117 of those yards before the first quarter was over and scored on runs of 16, 4, 1 and 1 yards, the last putting Lafayette up 35-0 with 6:44 left in the second quarter and well on its way to a matchup between the No. 1- and No. 3-ranked teams in 4A this Friday in Macon.

The matchup will pit Price and the Commodores’ veteran offensive line against a stout Noxubee County defensive front led by 6-foot-4, 270-pound Jeffery Simmons, a consensus four-star prospect ranked as one of the nation’s top defensive ends.

“I’m not sure he’s not the best,” Robertson said of Simmons. “I don’t know if we’ve seen anything like him this year, but we’ve got to concentrate on Lafayette and what we do. Our coaches will do a good job scheming them offensively and defensively, and it’s just a matter of coming out and playing.”

Lafayette scored on six of its first seven possessions for a 42-0 lead at the half. Tay Tay Owens added a pair of rushing touchdowns while quarterback Will Ard went 5 of 8 for 73 yards in one half of action before being relieved by Ross Ingram, who scored the Commodores’ final points on an 11-yard run late in the fourth quarter.

Gentry (6-5) avoided the shutout on Marquvius Kirkham’s 23-yard touchdown run early in the fourth quarter. Kirkham, who finished with 111 yards on 20 carries, was the Rams’ lone bright spot against a Lafayette defense that allowed just 204 yards and forced three turnovers.

“Each time you go out, you hope to get better,” Robertson said. “Hopefully we got better in some phase of the game. Hopefully that’s what we got accomplished.”