HOGWASHED: No. 19 Ole Miss falls to Allen, Razorbacks in OT 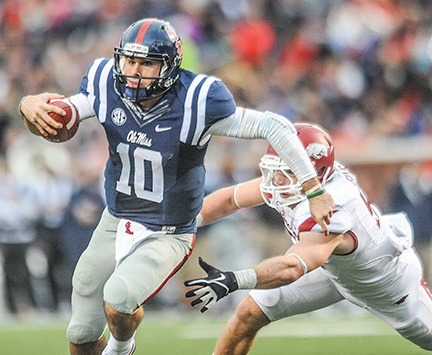 As hard as Ole Miss tried, the Rebels couldn’t get a stop.

In an offensive shootout that resembled something out of the Big 12 rather than the Southeastern Conference, Arkansas’ red-hot offense decided to go for the kill with quarterback Brandon Allen running for a successful two-point conversion in overtime to hand the Rebels a 53-52 loss that left many of the 60,680 fans in attendance at Vaught-Hemingway Stadium on Saturday stunned.

“You put so much into this deal and you lose games that come down to the wire like we did tonight, there’s no way around it,” Ole Miss coach Hugh Freeze said. “It’s very difficult and gut-wrenching and tests everything about you.”

It was Allen’s arm that gave an Ole Miss defense that held Texas A&M and Auburn to a combined 22 points the previous two weeks the most fits. Allen completed 33 of 45 passes for a career-high 442 yards and six touchdowns, his last going to Drew Morgan from 9 yards out in overtime to draw the Razorbacks within one following Ole Miss quarterback Chad Kelly’s third and final touchdown run on the opening possession of the extra frame.

Rather than try to send it to a second overtime, Arkansas (5-4, 3-2 Southeastern Conference) elected to go for two, a move that appeared to do the Razorbacks in when Marquis Haynes sacked Allen. But Haynes was called for a facemask to give Arkansas another chance, and Allen took the next snap on a designed run and extended the ball over the goal line for the final margin in a game that featured seven ties and four lead changes.

“I said before we started overtime, be prepared to go for the two-point conversion,” Arkansas coach Bret Bielema said. “I told the players if we make this touchdown, stay on the field and go for it.”

Arkansas had a chance to win it in regulation after stopping Ole Miss (7-3, 4-2) on fourth down to get the ball near midfield with 9 seconds left. Cole Hedlund attempted a 47-yard field goal with 3 ticks left, but Breeland Speaks blocked the kick to send the game to overtime knotted at 45.

“I did think we were going to go down there (in overtime) and get the job done,” Speaks said.

Then things got weird.

Kelly’s overtime run looked as if it would be the winning score when Arkansas faced a fourth-and-25 thanks to a delay of game penalty and Haynes’ second-down sack.

Allen threw short to tight end Hunter Henry, who absorbed cornerback Tony Bridges’ hit long enough to keep his balance and pitch the ball backward before being taken to the ground. Running back Alex Collins picked up the ball and reversed field to take the ball 31 yards to Ole Miss’ 11-yard line before fumbling. Dominique Reed recovered the loose ball to give the Razorbacks a fresh set of downs, and the Razorbacks snuck out with a win four plays later that all but ended the Rebels’ chances of winning the SEC’s Western Divison.

“I’m still in shock, still trying to bring everything together because in my mind I feel like we won the game, but the scoreboard and reality says that we lost,” running back Jaylen Walton said.

Said Kelly, “It stinks. There’s no words to describe it.”

The teams combined for 1,195 yards of offense and scored on eight straight possessions at one point. Allen set the tone for his monster day by completing his first eight passes and continued to exploit an aggressive Ole Miss defense that bit hard on the Razorbacks’ play-action and couldn’t hold up in man defense.

Kelly and the Rebels’ offense did everything they could to keep up, racking up 590 yards and scoring touchdowns on all seven of its red-zone trips. Kelly (24 of 34, 368 yards, three TDs) accounted for six touchdowns and led a running game that produced 222 yards with 110.

Ole Miss took its first lead at 24-17 on Kelly’s 23-yard touchdown pass to Damore’ea Stringfellow early in the third quarter, but the defense had no answer for Allen, who accounted for more than two-thirds of the Razorbacks’ 605 yards. Five of Allen’s scoring tosses covered at least 10 yards.