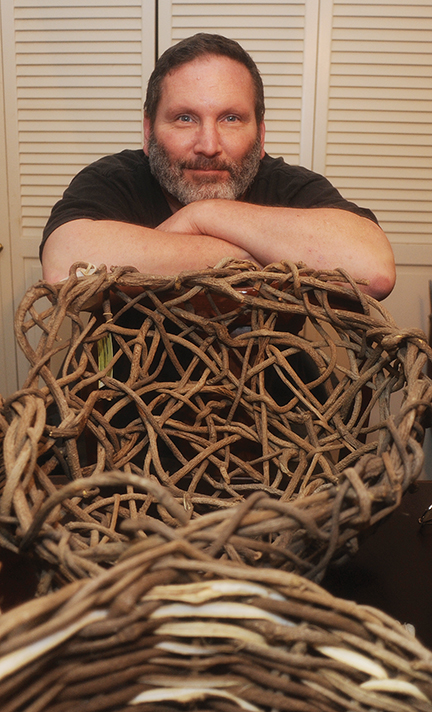 Mark Barnes has created some masterful pieces of art, weaving baskets from kudzu vines he has harvested in Mississippi, as well as Alabama, Georgia and North Carolina.

Mark Barnes makes art out of something most people want to take a flamethrower to in their yard.

Instead of getting out the Roundup, Barnes, 49, readies a shovel and takes kudzu home with him.

Ever since he took a class in 1996 in North Carolina, Barnes has been crafting baskets out of the unpopular vine, which are a hit at area art festivals.

“I really like experimenting and trying new things and just seeing that I haven’t really found a limitation for it, except for square shapes, I’ll figure out some way to do that at some point,” he said.

While square shapes are out, his newest creation is in and being produced in time for the holiday season. For the past three years, his kudzu Christmas trees, that are lit, are a big demand. It’s that creativity for new things that helps keep him weaving as well as the ease of working with kudzu.

“You don’t have to treat the vine, you don’t have to soak them or boil them, and you don’t have to order basket-making supplies online, there’s really no measuring, and the fact that it’s also very forgiving too, which I guess is why I like it,” he said. “I’m not boxed into a certain thing.”

Banes has been a resident of North Carolina since 2004, but he returns to Oxford for extended time frames due to his involvement with the Oxford Artist Guild and the Powerhouse. He has been involved with the Double Decker Art Festival’s show since its inception.

Banes’ involvement in Oxford began while he was working as a chef in Oxford. Eventually he opened up his own business with a partner, Panini and Oxford Catering Company, in 1998. However, his health dictated a different path.

“In 2000 I was diagnosed with Multiple Sclerosis so basically it’s one of those diseases where you can’t take the heat so you’ve got to get out of the kitchen. The heat is really bad for me,” he said.

Barnes has both relapsing and remitting MS, and heat is a primary trigger for a relapse. So now he tinkers around in his own kitchen and experiments with foods, but his main hobby is kudzu.

“I usually come down twice a year, in the spring and the fall,” he said. “In the fall especially because I’ve been doing shows with the Oxford Artist Guild there. Plus, this is where the kudzu is, and I go where the kudzu is.

“You can pretty much find it everywhere but here it’s predominant. It’s some pretty serious business. The only place I’ve seen it worse is up in the mountains in North Carolina, like around Hickory up to Asheville, it’s really taken over.”

He said kudzu has “massively taken over everything” in portions of Mississippi, Alabama and Georgia.

“Basically you can’t get rid of it,” he said. “The only way to get rid of it is to plow it up and pave a roadway over it or something. It just keeps coming back every year no matter how many times you spread or cut it. It’s a determined vine.”

But that determined vine is just like any other wood when turned into a basket, which can be done in a couple hours or a couple of days, depending on the thickness of the vine and the type of basket.

“When you pick it up, it dries like a regular wood would, but it’s firm,” he said. “It doesn’t stay pliable. The only thing you have to worry about with the baskets themselves is you just really want them to stay dry, otherwise they will rot like any other basket would.”

The kudzu bug has reached Mississippi, and he’s wound up with one on his hand while working, but the bug, which sucks the moisture out of the vine, isn’t affecting his craft.

“Kudzu is very resilient,” he said.

Mark Banes has spotlighted his craft as part of a show on the DIY channel and has taught a few classes at the library and university. He’s also taught a continuing education class for adults and a craft class for children. If you’re interested in the kudzu baskets, visit him at the upcoming Holiday Arts Market Nov. 12-15 or call 662-234-4712.