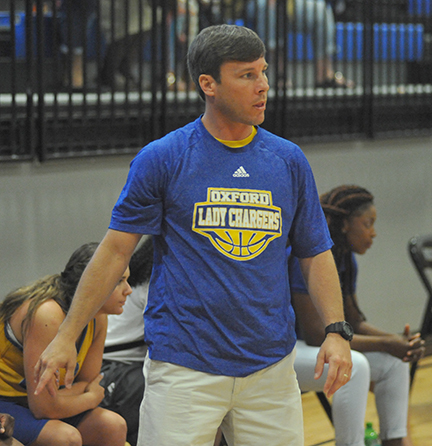 When Cliff Ormon was tabbed as Oxford’s new girls basketball coach in the spring, he didn’t have to change the culture.

He wants to keep it the same.

Ormon left Ripley to fill the vacant post left by Shayne Linzy, who took the same job at Lafayette. Oxford was a playoff mainstay under Linzy, who led the Chargers to a Class 5A state championship in 2012 and Region 2-5A regular-season and tournament titles a season ago.

Ormon had some success of his own in his two seasons at Ripley, guiding the Tigers to a pair of Class 4A playoff appearances and 28 wins a season ago. Ormon is inheriting a team with a number of key pieces back despite the loss of leading scorer Janesha Johnson to graduation and expecting to pick up where the Chargers left off under Linzy.

“This team has the personnel, the leadership and the talent to be right there in the mix (for a playoff berth),” Ormon said.

A universal trait for Ormon’s teams is constant full-court defense, and the coach doesn’t see his first squad at Oxford being any different with a guard-heavy roster. Seniors Aliyah Herod and Emma Schultz along with junior Tiara King are all back on the perimeter with Ormon looking for youngsters to emerge behind them to give the Chargers the number of bodies they’ll need to keep the pressure on the opposition from start to finish.

“With our size, we have to maintain ball pressure at all times whether it’s different types coming from different places or other things,” Ormon said. “We might not do it the way we’ve always done it at Ripley the last couple years, but we will be a pressure team.”

Which players eventually become part of the regular rotation, Ormon said, is all up to them.

“If they’re doing what I ask and they’re giving us great minutes in practice and can show it in a game, then I’ll play as many as can get out there and fill our needs,” he said. “Right now, I see about eight or nine that could do that, but again, it’s going to be based on production.”

Back in the middle

The one player that can balance the Chargers’ lineup out is senior forward Kyla Malone, who’s fully healthy after missing all of last season with a knee injury. The 5-foot-11 Malone, Ormon said, will be a focal point for the Chargers when they have to operate out of their half-court sets, giving Oxford an inside presence it missed a season ago.

Junior Maggee Hobson, who can play inside and out, will also be counted on for interior scoring and rebounding.

“There’s no doubt with our guard play, we want to push tempo, but if we want to set up our offense, then we’ll go through our post player,” Ormon said. “With (Malone) in the game, we’ll be able to do some things around the rim. We can really use her.”

The Chargers hosted a preseason jamboree last Saturday but will get the season started for real Tuesday at home against Calhoun City.