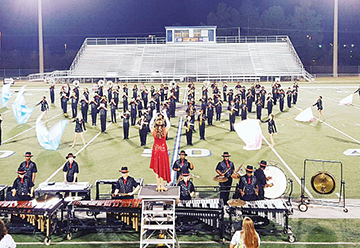 While most of Oxford headed to campus to watch the Rebels beat Texas A&M on Oct. 24, a completely different group of competitors, followed by its loyal fans, boarded school buses and headed in the opposite direction to Pearl High School for the MHSAA State Marching Band Championship Competition.

There Oxford High School rounded out its season by receiving third place from the Mississippi High School Activities Association in marching/visual and seventh place overall, the highest ranking in school history.

Earlier in the fall, on Oct. 3, the marching band traveled to Lewisburg High School to compete in the Southern Stars Marching Contest.  There the band earned a fourth place overall ranking.

The 140-member band is under the direction of Mel Morse, Jared Brownlee, Marsha Morgan, and Jessica Roebuck.  According to Morse, “the students had a wonderful year of growth capped off in Pearl with their best performance of the season.”