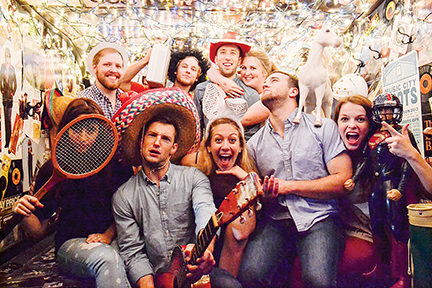 One of the newest additions to the Square, Oxford PhotoBomb has reinvented the photo booth experience by providing a one-of-a-kind backdrop and enough props to put on a play.

The Oxford PhotoBomb is a 14 foot long 1973 Broken Arrow Travel Trailer that has been converted into a funky mobile photo booth.

Long-time friends turned business partners, Hiram Eastland III and Jeff Crow, both agreed the Oxford Square would be an ideal location for the unique photo booth when it isn’t booked for private events.

While Crow already ran a mobile photo booth business in Nashville, Eastland wanted to open another location in Oxford.

“Crow was telling me about this side business he had in Nashville, and I said, ‘Man that would really do well in Oxford. I’m going to buy a trailer, and I want you to decorate it like you did the one you have, only Oxford-themed,’” Eastland said.

A musician whose career was taking off, Crow was offered a spot to play the keyboards in Sturgill Simpson’s band.

Suddenly, on a worldwide music tour, Crow called Eastland up and told him to stop looking for a trailer to buy and, instead, turned over the Nashville trailer to Eastland to bring to Oxford. Eastland rebranded it as the Oxford PhotoBomb.

“It was late June when I got the trailer,” Eastland said. “Jeff played at Bonnaroo on a Saturday and met me in Jackson, Tennessee, on the following Sunday, and from there, I brought it to Oxford.”

Located across the street from Funky’s and parked in the Jones at Home driveway, Eastland began operating the photo booth on the Square late August.

As awareness of the new business increases, Eastland said the photo booth has already had multiple bookings for private events.

“Our first booking was a charity event called the Leap Frog Firecracker Bash, and it was kind of a test to see how the photo booth would do,” Eastland said.

“We were also asked by the Oxford Charger Booster Club to do the Oxford School District Foundation Tailgate as another charity event. The money we raised there went to the Junior High School Cheerleaders,” Eastland said.

“We are now getting emails or calls almost daily inquiring about booking the PhotoBomb. We’ve got events booked all the way out to May of 2016 right now,” Eastland said.

Eastland, a practicing attorney, had to balance his full-time job with starting the photo booth business.

“As a lawyer full-time, this side business was initially really time-consuming,” he said, “but now that I’ve found a good team to help run it, it’s become much easier.”

Operating Thursday through Saturday on the Square, Eastland needed a team that could help with events and take over the late-night shifts.

“It’s a really fun business, and we plan on having multiple trailers in Oxford one day, as well as probably in other college towns,” Eastland said. “I think you get more events through a college campus and college town than any other area, so it’s a great setting for a business like this.”

Recognizing Oxford’s population as predominantly college students, the cost of the photo booth when it’s set up on the Square reflects their budgets.

Free of cost to get your picture taken, and $5 for each high-quality 4×6 print, Oxford PhotoBomb is budget-friendly.

“One customer asked me if we would print pictures from her camera instead of having to go to the drug store to do it. She said it’s faster, and the pictures are better. I told her I’d be glad to,” Eastland said.

Customers, who opt not to print their photos, can find their pictures uploaded to the Oxford PhotoBomb Facebook page for download, free of charge.

Satisfying customers and enhancing their experience while on the Square are some of Eastland’s favorite things about running the business.

“The other night, I just sat across the street and watched people walking out of the photo booth and listened to them say how fun it was, and that they will definitely go back,” Eastland said. “It makes people happy, and they have a good time. That’s what’s important; our customers walk away with great pictures they will have for years to come.”

Chloe Nelson, a senior at the University of Mississippi, is one of those satisfied customers.

Learning about Oxford PhotoBomb through Instagram, Nelson was instantly intrigued by her friends’ pictures from the photo booth that kept showing up on her feed.

“My friends kept posting these adorable pictures on social media from the photo booth, and I just thought the whole thing looked so cool,” Nelson said. “It made me really want to go and see it for myself.”

Visiting the photo booth for the first time, Nelson was pleasantly surprised at the price of getting your picture taken.

“When they said it was only going to cost $5, I thought it was an awesome deal,” Nelson said. “They take multiple pictures per group, and you get to choose which ones you like best and how many you want to print, and they print them for you on the spot.”

“When we go out, we look our best and want to get plenty of cute pictures. Add a fun backdrop and random props, and you’re bound to create a lot of business that way.”