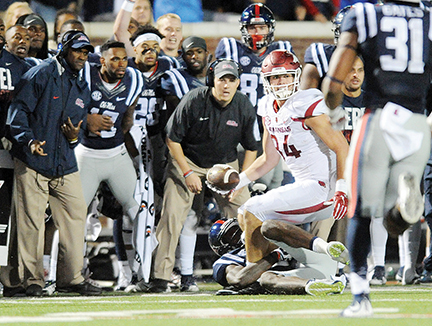 Arkansas Razorbacks tight end Hunter Henry (84), in the grasp of Ole Miss defensive back Tony Bridges (1), laterals the ball back to Arkansas Razorbacks running back Alex Collins (3), who runs for a first down on a 4th and 25 play in overtime at Vaught-Hemingway Stadium in Oxford, Miss. on Saturday, November 6, 2015. Arkansas won 53-52 in overtime. (AP Photo/Oxford Eagle, Bruce Newman)

Those are the numbers the Ole Miss defense allowed against Arkansas in Saturday’s 53-52 overtime loss.

It was supposed to be a defensive unit on the rise after its performance the past two weeks against Texas A&M and Auburn.

In the last two games, the Rebels held the Aggies and the Tigers to 22 points. This week it was a return of a defense that allowed 75 points and 846 yards in their previous two losses to Florida and Memphis.

“Our game plan was obviously not very good,” Ole Miss coach Hugh Freeze said. “The number of big plays we gave up was very disheartening at times.”

Ole Miss could not stop or even contain him. The Southeastern Conference’s most efficient passer threw for a career-best 442 yards and six touchdowns, completing 33 of 45 passes.

The Rebels struggled covering tight ends all night. The play-action bootleg was open whenever Arkansas wanted to return to it in the playbook, which was nearly every play.

It was not just the tight ends having success as everything was clicking for the Razorbacks on offense. It was similar to the performance Memphis quarterback Paxton Lynch put on in the Liberty Bowl on Oct. 17 where missed tackles were plentiful and the receivers were wide open in the secondary.

Wideouts Drew Morgan and Dominique Reed each went for more than 100 yards and combined to be on the receiving end of five of Allen’s touchdown tosses.

“It was like (Arkansas) was a step ahead of us in everything that we did tonight,” defensive coordinator Dave Wommack said. “We felt like we had a good plan going in. Obviously we didn’t. Now we have to go back to square one and look at it. I haven’t had very many games like that (Saturday).”

The only positive on the night for the Rebels’ defense was the ability to control the Razorbacks’ running game.

Arkansas entered the game ranked fourth in the conference, averaging 196 yards per game. Ole Miss held the Hogs to 169 yards with Collins leading the way with 109 yards on 17 attempts.

The defense was on the field for 84 plays and 41 minutes, 3 seconds — more than a third of the game. It was the most time the Rebels’ defense spent on the field this season, besting the 37 minutes they spent against Memphis.

“Played too many plays,” Wommack said. “You play so many plays, your energy level isn’t going to be there if you play twice as many as the other team.”