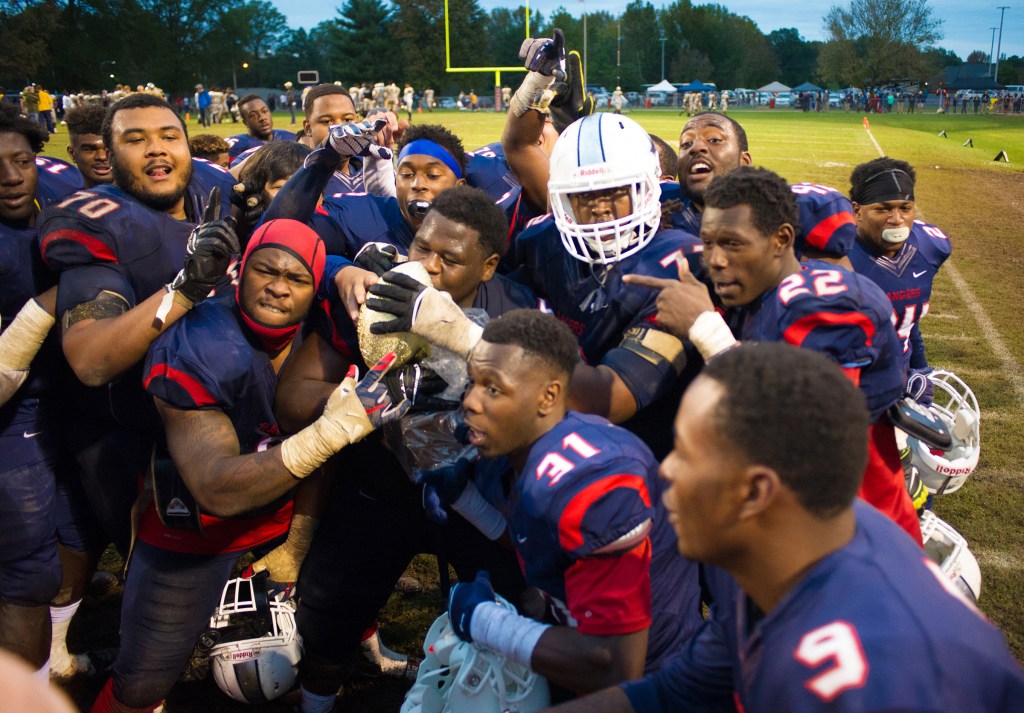 The wait is finally over.

For the first time in 16 long years, the Northwest Rangers are MACJC football champions, defeating Gulf Coast 34-24 on Saturday to claim its ninth football title in program history (first since 1999).

NWCC improved to 10-1 overall, defeating its fifth ranked opponent this season. It’s also their first-ever postseason win over the Bulldogs in eight tries. MGCCC fell to 8-3 with the loss.

The Rangers’ swarming defense got to MGCCC quarterback A.J. Erdely all afternoon long, just as they did the first meeting of the season back in September. Northwest finished with six sacks, three from freshman Quondarius Qualls, and tallied 14 total in two games against the Bulldogs.

NWCC took its second drive of the game 49 yards in three plays, with Gardner Minshew going 3-for-3 on the drive and connecting with Marquisian Chapman for a 13-yard touchdown and 7-0 lead.

Gulf Coast responded 5 minutes later to tie the game at 7-7 after Erdely’s 6-yard quarterback keeper. The scoring drive was setup by T’Rod Daniels’ 54-yard punt return down to the Northwest 11-yard line.

The Rangers jumped back in front minutes into the second quarter when Justin Crawford broke a 50-yard touchdown run to make it 14-7. Crawford’s run put him over the 3,000-yard mark of his illustrious career, the only player in school history to accomplish the feat.

Joshua Rowland’s 39-yard field goal with 15 seconds remaining in the quarter pulled Gulf Coast within 14-10 at half.

After the Rangers’ opening drive of the third quarter stalled out at the MGCCC 15-yard line, it was the NWCC defense that cranked it up a notch.

Corey Brown strip-sacked Erdely at the MGCCC 32-yard line and then scooped and scored from 22 yards out to make it 21-10 with 10:58 left in the third.

Two possessions later it was the defense again, this time Tito Windham. After Quondarius Qualls sacked Erdely for a 14-yard loss it was Windham who picked up the loose ball at the 5-yard line and scampered in for the score and 27-10 lead.

MGCCC pulled within 27-17 just 40 seconds later, however, when Erdely scrambled outside of the pocket and then hit Johnathan Nance for a 62-yard touchdown to end the third quarter.

NWCC took its largest lead, 34-17, with 11:30 to play in the game after Minshew hit Crawford out of the backfield for an 18-yard touchdown on 3rd-and-12. The drive was aided by a 15-yard unsportsmanlike conduct penalty and kept alive on Jacob McCrary’s 28-yard diving catch.

Erdely drove the Bulldogs 83 yards on nine plays with the clock running under 6 minutes and hit Nance for a 4-yard touchdown to make it 34-24 with 2:49 remaining. Erdely was 6-for-8 on the drive for 81 of the 83 yards.

Gulf Coast got the ball back with 1:05 remaining and drove it down to the Northwest 2-yard line before the final horn.

NWCC will now turn its attention to the Mississippi Bowl on Dec. 6 in Biloxi for the NJCAA National Championship. The Rangers will find out their opponent in the coming week.