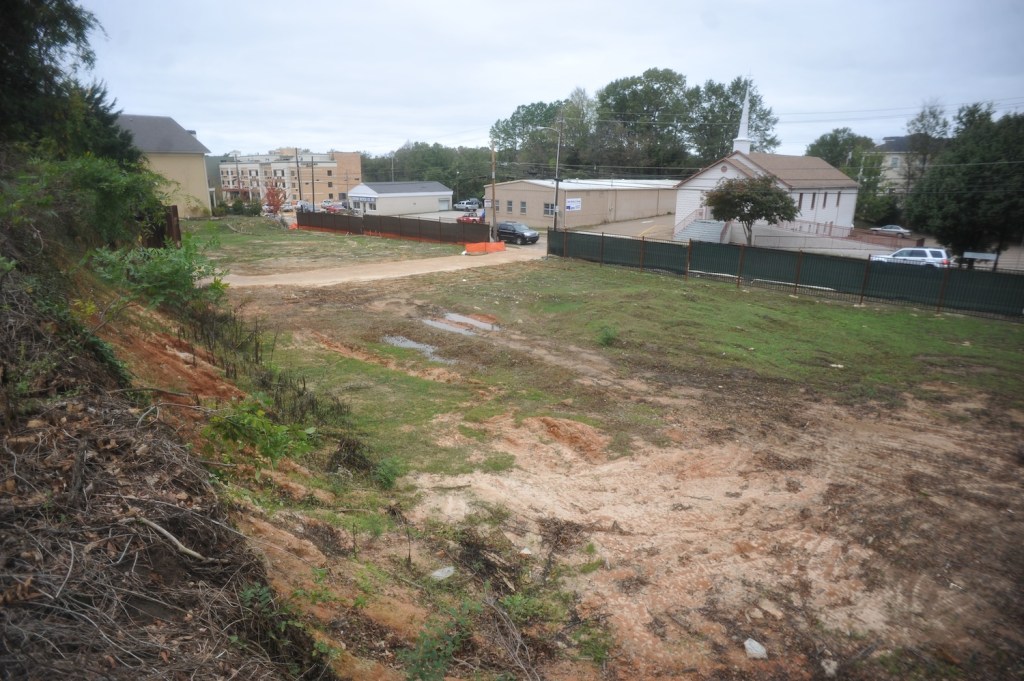 The muddy hole on East Jackson Avenue may soon show signs of movement on a commercial and residential building project that was first approved in 2012.

The Oxford Planning Commission granted developers for Jackson Row a special exception — again — to allow for residential units in a General Business zone.

Jackson Row was given a special exception when developers first presented the site plan in December 2012, to allow residential condominiums on top of commercial space. The original developers sold the property to CA Ventures of Chicago that appeared before the Oxford Planning Commission earlier this year to get an extension of the special exception as the original had expired. It was granted, but with some required milestones. One was to begin construction in June.

However, some issues with the buildings’ heights stalled the plans and the milestone was missed, causing the special exception to be null and void.

On Monday, Chris Johnson with CA Ventures asked the planning commission to vote for the special exception again so that progress could be made on construction. A new site plan also was presented since the original plan for the development has changed slightly from the original plan.

The development will be a five-story, 110,411-square-foot building which includes 10,600 square feet of commercial space. The residential portion of the development contains 69 units, with 224 beds and 232 underground parking spaces.

The conditions of approval include: mobilization/groundbreaking 45 after issuance of a building permit; footing/foundation six months from groundbreaking; built to grade six months from footing/foundation; a return to the planning commission in July 2016 to give a status report with documentation that all mile- stones have been met. The special exception will expire in 18 months if no permits are issued.

“I’m sure all of you are tired of viewing this on paper and want to see something in real life,” Johnson told the commission. “We have been working furiously with the staff to make sure everything is addressed.”

Commissioner John Bradley asked Johnson when the project is expected to be complete.

“If we begin excavation in December, then by the fall of 2017,” Johnson said.

The commissioners voiced some concerns about the residential part of the development being built up and rented first and the commercial areas left empty.

“It’s to our advantage to get those rented out,” Johnson said. “We don’t want the commercial part to stand empty. We will do

everything we can to get those leased.”

“This has got to get finished,” said Commissioner John Abernathy, who added concerns about the increase of traffic issues

along Jackson. “It’s going to get worse, but not sure what we’ll do about that but we have got to do something.”

The commission approved the special exception and site plan unanimously.

— Tabled a request for a site plan approval for U Club Townhomes at Oxford on Price Hill Drive, a 66-duplex unit with 396 bedrooms and more than 550 beds. One bedroom in each unit is two beds, which can be rented individually.

Several neighbors from the Price Hill and St. Andrews neighborhoods attended the meeting to oppose the development siting issues with storm-water runoff, excessive traffic on Price Hill Drive and the density of the project which is located in a RB, Two- Unit zoning and meets the maximum amount of units allowed in the RB zone. The commission voted to table the application to allow developers time to meet and address some of the neigh- bors’ concerns.

— Approved the rezoning of .91 acres from Medical District to Neighborhood Business off South Lamar Boulevard and Belk Boulevard Extended.

— Approved a site plan amend- ment for The Park at Oxford Commons.