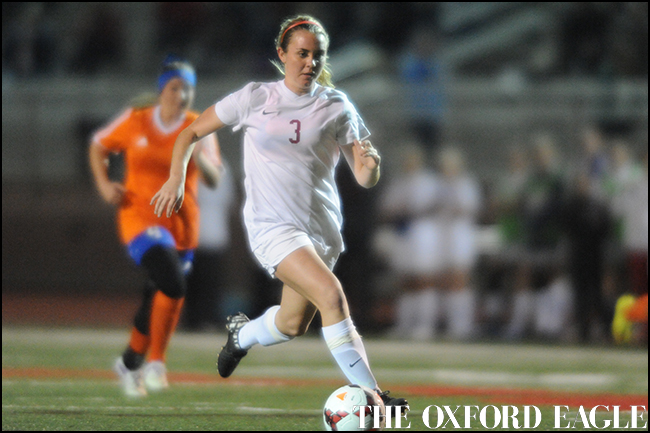 Not when everybody is gunning for the Commodores.

Lafayette took the pitch Tuesday against a real opponent for the first time since winning its first-ever state championship back in February. The Commodores (1-0) started their Class 4A title defense by overwhelming North Pontotoc, 7-0, at William L. Buford Stadium.

“We had a good feeling we were going to win, but we had to make sure we gave everything we got and didn’t expect to win just because we did last year,” senior forward Alley Houghton said.

The Commodores constantly sped past the Vikings’ back line to get uncontested shots on goal with Houghton doing most of the damage. Houghton scored a state-record 69 goals a season ago, and the reigning Mississippi Gatorade Player of the Year picked up where she left off, putting four balls in the back of the net with three of them coming before halftime.

Her sister, Maddy, got the Commodores on the board with her first of two goals less than 2 minutes in. The sisters combined to notch Lafayette’s first four goals before sophomore Emma Wilson finished off a set piece to make it 5-0 with 14:12 left in the first half.

Team effort
Just about every player did get in the match in the second half with the Commodores enjoying a comfortable 6-0 lead at the break. Lafayette will get stiffer challenges later in the season, but the Commodores’ first match wasn’t as much about the opposition as it was a chance to get a quick self-evaluation, Scruggs said.

“Focusing on the backs and their roles and making sure they’re in the right spots,” Scruggs said. “We even talked at halftime how they could improve a couple things because that No. 2 was very fast and how we make sure we take care of her. And then the midfielders are communicating and forwards, too. Getting crosses in, we need to finish that. Just stuff that we’ve been working on in practice.”

Houghton and her teammates believe they can have everything clicking sooner rather than later.

“We do see the improvements we need to fix, but I think a couple games in, we’ll see the state champs that we were last year,” Houghton said.

BACK IN ACTION: Rebels return to NCAA Tournament, host…